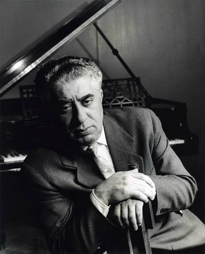 Aram Khachaturian was nervous. In the 1930s and ’40s he had made a name for himself as one of the Soviet Union’s foremost composers. He had long wanted to conduct, but in 1950, when he was invited to conduct a performance of some of his music, he hesitated.

“At least come to the rehearsals,” he was urged. “The orchestra has already rehearsed and everything is ready. The orchestra will play correctly even if you conduct backwards.”

Khachaturian consented to conduct the rehearsal. Everything went well and he agreed to conduct the actual performance, scheduled for that evening. Then he got nervous all over again. “I didn’t know what to do with my hands,” he said later, “or how to stand.”

The concert came out all right, and Khachaturian began to take to the idea of becoming a conductor, but not a professional. He just wanted to conduct his own music.

First he conducted close to home, in Armenia. When he got farther away, his self-confidence began to waver.

Fellow composer Dmitri Kabalevsky described a particularly challenging concert at a collective farm in the far-off Altai region in 1958.

The orchestra was squeezed onto a primitive stage in a huge barn-like building in which an audience of about six hundred sat on benches. In the front row, a young man in uniform sat next to his wife, who was breast-feeding their baby. The first part of the program, selections from Khachaturian’s ballet Gayneh, puzzled the crowd. They exchanged opinions openly during the performance.

Then came Khachaturian’s Violin Concerto, also puzzling, until the lyrical second movement, during which the audience fell silent. The young Russian in uniform became captivated by the music and his wife had tears in her eyes.

Khachaturian could see none of the reaction and was more nervous than ever. But at the end, when it was clear that he had won over his listeners, he said that he had never experienced such complete satisfaction.