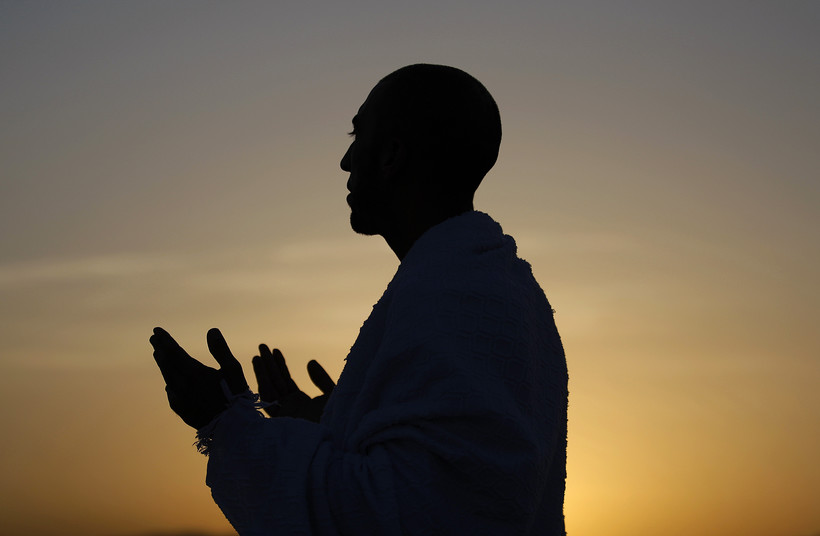 A Muslim pilgrim prays on a rocky hill called the Mountain of Mercy, on the Plain of Arafat near Mecca, Saudi Arabia, Friday, Nov. 4, 2011. The annual Islamic pilgrimage draws 2.5 million visitors each year, making it the largest yearly gathering of people in the world. Hassan Ammar/AP Photo

While science can explain the natural world and ethics can dictate our behavior toward one another, not all questions and experiences can be handled rationally.

"I do think there are forms of suffering that happen to us, even in our scientific age, for which there is no scientific alleviation," said Stephen Asma, a professor of philosophy and founding fellow of the Research Group in Mind, Science and Culture at Columbia College in Chicago. "A parent loses a child. What ... is going to come to the rescue of such despair?

In his book, "Why We Need Religion," Asma, a self-described agnostic, makes the argument that religion can manage emotions in ways that rationality and science cannot.

WPR's Rob Ferrett spoke with Asma about his recently published book and why he thinks religion is key to humanity. This interview has been edited for brevity and clarity.

Rob Ferrett: Why do you use the word "religion" instead of less formal expressions of spirituality in your argument?

Stephen Asma: Many people fashion their spiritual practices and beliefs outside the constraints of religious institutions. What they're doing is engaging in the magical thinking of spirituality, but what they lack is the social connection that traditional religion has provided.

What I think religion provides that spirituality lacks, at least in its current formulation, is social bonding. And that social bonding is absolutely crucial for happiness. We're living in a society where more and more people are buying a spirituality application for their phone and sitting in the room and sort of meditating. That's great, but also one needs the social interaction that religion provides, too.

RF: Where are you coming from and what experiences qualify you to make this argument that we need religion?

SA: I was raised religious, devout Christian home and then went away to college, and like a lot of people, had a lapse in my faith. I got a doctorate degree in philosophy, and I couldn't commit to the religious ideas like I had before.

There's a growing number of younger folks, the millennials, who mark themselves as "nones," meaning they reject traditional religious affiliation. They may be spiritual, or may be agnostic like myself, but they no longer subscribe to a religion.

I looked around and saw that the only people sort of talking about religion are either very devout believers or sort of the new atheists who are extremely intense critics of religion, saying "it's stupid," "it's for stupid people" and "it's ignorant." And I thought there's a huge middle ground that's missing here.

RF: You write that "Religion's main function is not a path to morality, nor can it substitute for a scientific understanding of nature, it's chief virtue is emotional management." What do you mean by that?

SA: I didn't quite appreciate this until I went and lived in the developing world. About 15 years ago I lived in Cambodia. I've also lived in China and traveled a lot in Thailand, in Laos and in Vietnam, and I began to see that religion in these places is really about emotional management — a sort of therapy for our emotional lives. And I could see it clearly there because people are suffering greatly.

I could see there were places where science or medicine could not really help people with this suffering. Religion, however, was extremely helpful in helping people keep their peace of mind, keep their optimism, keep hope, stay in inspired, stay strong. In the daily life of the average person, our religion is extremely good at managing our emotions.

RF: You look at neuroscience and evolution and make the case that our brains are emotionally wired to be receptive to spirituality and religious beliefs. Can you spell out how that works?

SA: I did some work starting 10 years ago on emotional neuroscience, which is basically studying how we feel. There's anywhere from four to seven basic emotions such as fear, love and anger.

There's this list of emotions in the deep old brain — this is part of being a mammal. This brain has been evolving for as long as 200 million years.

The rational part of our brain is relatively recent. That's the neocortex. It's what gives us rationality and is probably where a lot of our executive functions and cognitive thinking reside.

The argument I'm making in the book is that religion is one of the earliest forms of culture that evolved, and it's very good and helping us with this emotional brain. How we feel is as important to our survival as how we think.

RF: We discount that, you write. We may think we're more rational than we really are, not realizing that the emotion is still there as a guide.

SA: Right. We have a distorted picture of our own rationality. We think we're always being rational and the emotions maybe contaminate our logical calculations. But really, it's quite the opposite.

Most of us are operating through our emotions — the emotions evolved as an adaptive strategy for our social world. We have to deal with people in our family on a daily basis. You had to get up and deal with members of your family, the social hierarchy at work, and so our emotions are very good and helping us navigate in this form of social intelligence.

Along comes the rational brain, and it's very good at describing the world and giving us things like science.

But how many scientific problems did you solve this morning or today? I've had to solve many social problems or challenges. And emotions are very good at helping us there, and I think religion steps in when we can be overwhelmed by emotions, like in cases of grief or fear or anger.

RF: It would be easy to argue that this particular belief is right or wrong. You seem to be making the case, who cares? Let's see what it does for us in our daily lives.

SA: There's a range of beliefs where the evidence is not clear one way or the other. And in those cases, I follow the American pragmatist philosopher William James who said, "live and let live."

If it helps you to believe in this thing, and it has palpable benefits to you, then there's no reason why you shouldn't.

I think what the atheist and skeptic is worried about is they're desperately afraid they're going to believe in something that turns out to be false. They don't want to be duped. They don't want to end up looking like a boob somehow. That's also an emotional anxiety or fear, and James said they're working from their own emotional palate and they should be more charitable toward people with different beliefs.