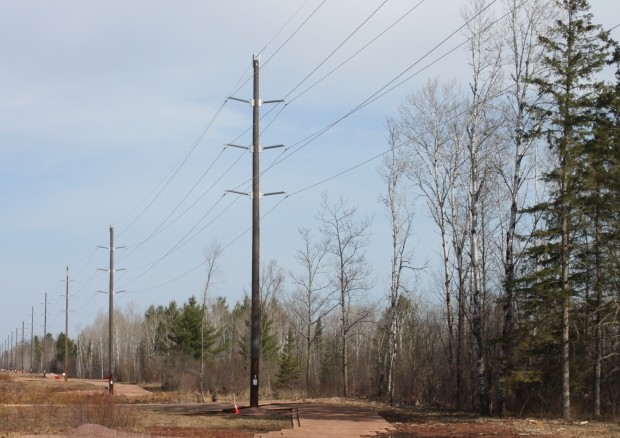 The Wisconsin Public Service Commission voted unanimously on Wednesday to require Northern States Power Company, a Wisconsin subsidiary of Xcel Energy, to build a proposed transmission line in northern Wisconsin across the same route of its existing power line.

The company plans to build a new 34.5 kilovolt transmission line and two new substations on the Bayfield Peninsula in addition to the existing 71-mile line to improve reliability of power in the region. Xcel had proposed two possible routes for the project — and east route and a west route. The east route follows the existing utility corridor and was favored overwhelmingly by local residents.

"I think there was no question that’s what they were going to decide on based on the overwhelming community support for that," said Ellen Heine, Xcel’s senior siting and permitting agent.

Xcel estimates the project will cost around $35 million, which is roughly $7 million more than the anticipated cost of its proposed west route. Community members have argued cost estimates don’t reflect the need for repairs to the utility’s existing line, which was built between 1957 and 1971.

Town of Washburn Chair Sandy Raspotnik said she was pleased with the commission’s decision and the utility’s willingness to work with communities on the peninsula.

"The idea of the Town of Washburn is to keep the rural intent and the rural environment and having a major power line go through (the west route) would take away that rural aspect," said Raspotnik.

Local officials have said forestry and tourism are significant sectors in the region’s economy, fearing that an alternative route would have negatively impacted the Bayfield County forest and the visitor experience.

"People, I think, are drawn to that rural peace at this point in time, trying to get away from some of the hustle and bustle," said Raspotnik.

Town of Bayfield Chair Tom Gordon agreed, highlighting that tourists from the Twin Ports and the Twin Cities frequent orchards and fruit farms on the peninsula.

“We are in a pretty aesthetic place," he said. "People come here because it’s beautiful.”

Susan Hedman, attorney for Clean Wisconsin, issued the following statement in response to the commission’s decision:

"Use of the existing transmission corridor is clearly the superior option proposed in this case. It will have fewer long-term impacts than construction of the project in the new corridor where NSP originally proposed to build the project. The route approved by the PSC is shorter and, consequently, will pose less fire risk than the alternative route. It will also have fewer negative long-term impacts on forests, wetlands, rare species and homes and property values."

There are 80 homes within 300 feet of the new transmission line that may be impacted, but more homes that were previously unaffected would have been impacted under the alternative route.

Xcel said it will now work on notifying landowners and stakeholders on next steps for the project. The utility still has to obtain additional permits from Bayfield County, the Wisconsin Department of Natural Resources and the U.S. Army Corps of Engineers. The utility will be required to work with the DNR to minimize impacts to rare plants and birds in addition to reducing impacts to waterways and wetlands. It must also limit effects on landowners and farms in the area.

"With that second line in place, it also allows (Xcel) to be able to serve power further up and around the peninsula from the east side, so we’re able to do additional rebuilds on the line that runs around the west side from Iron River to Cornucopia," said Xcel's Heine.

Xcel said it can’t conduct a rebuild for parts of the line on the west side of the peninsula without interrupting service until the new transmission line is built.