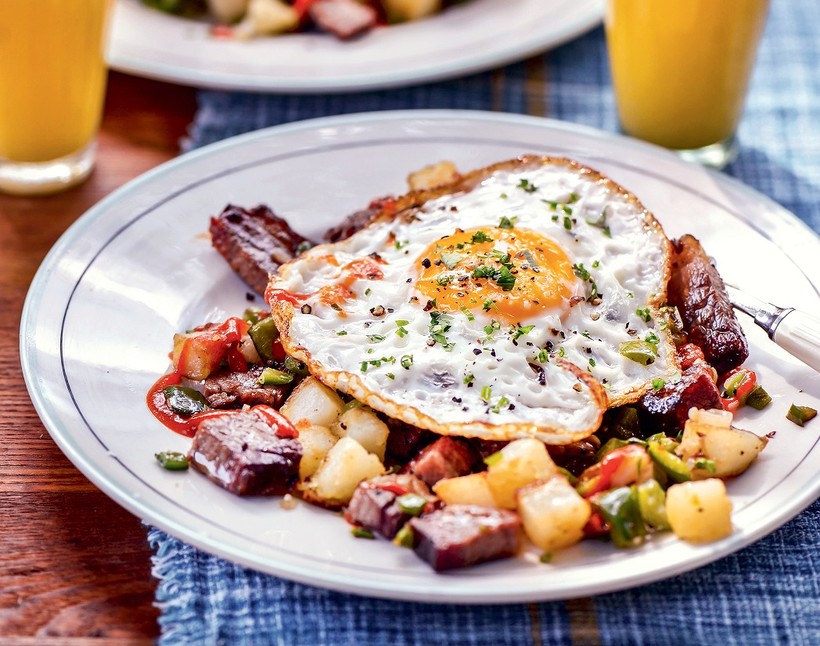 THE ULTIMATE BREAKFAST HASH is excerpted from THE BRISKET CHRONICLES: HOW TO BARBECUE, BRAISE, SMOKE, AND CURE THE WORLD'S MOST EPIC CUT OF MEAT © 2019 by Steven Raichlen. Reproduced by permission of Workman Publishing Co. All rights reserved.

The Ultimate Breakfast Hash (Yes, There Will be Brisket)

YIELD: Serves 2 (can be multiplied as desired)

WHAT ELSE: This recipe calls for barbecued brisket, but equally delectable hash can be made from homemade corned beef (the classic — see page 111) or pastrami (Old School, page 93, or New School, page 100).

I don’t know about you, but I believe in the afterlife. The afterlife of brisket, that is — the resurrection of this rich smoky barbecued beef in salads, stuffings, and stir - fries. Above all, I believe in leftover brisket for breakfast — especially in hash. Named for the French verb hacher (“to chop” — the same etymological root that gives us our word hatchet ), hash requires little more than a sharp knife and a cast - iron skillet. This one derives its firepower from poblano peppers and sriracha. Hash is infinitely customizable: Swap the poblanos for bell peppers, for example, or the potatoes for yams or yucca. If you’re used to the usual corned beef hash, the intense smoky flavor of this brisket hash will come as a revelation.

Corned Beef or Pastrami Hash: Prepare as described above, substituting corned beef or pastrami for the brisket. Use onions instead of shallots and red or yellow bell peppers (or a mix) instead of poblanos. Replace the sriracha with Louisiana - style hot sauce such as Crystal or Tabasco.

The Brisket Chronicles: How To Barbecue, Braise, Smoke, And Cure The World's Most Epic Cut Of Meat

The Brisket Chronicles: How to Barbecue, Braise, Smoke, and Cure the World's Most Epic Cut of Meat