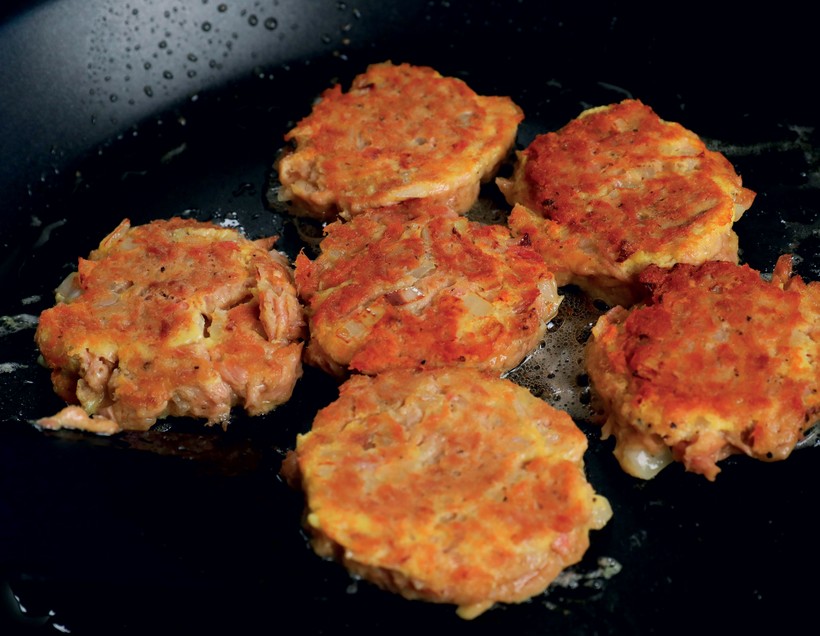 It’s hard for people to believe that such a delicious Korean side dish can be made from just one can of tuna. “What? You made this with just a can of tuna? I use the Korean canned tuna sold at Korean grocery stores because it’s less watery and a little meatier than other tuna, but any unsalted water packed or oil-packed tuna will work. If you use any other canned tuna besides Korean, add up to 1 more tablespoon flour to get the right consistency. Many of my followers have told me that canned salmon also works nicely.

1.Drain the tuna from the can into a strainer. Lightly press down on the tuna with the back of a spoon to press out more liquid (without pressing the tuna through), then transfer it to a bowl. Add the onion, garlic, salt, pepper, egg, sesame oil, and flour. Mix well with a spoon until well incorporated. Divide the mixture into 6 equal portions in the bowl with the spoon.

2.Heat the vegetable oil in a nonstick skillet over medium-high heat and swirl to coat the skillet. Scoop up 1 portion of the tuna mixture with a spoon, place it in the skillet, and flatten and round the edges to make a 2-inch disk. Repeat with the rest of the tuna mixture. Cook for 1 to 2 minutes, until the bottom turns golden brown and a little crispy. Turn and cook for another minute, until both sides are golden brown.

3.Remove from the heat and transfer the tuna pancakes to a plate. Serve right away.

Korean canned tuna is more chunky, meaty,and flavorful than other kinds. It’s usually sold in yellow pull-top cans and comes in a variety of flavors, which are not always translated well into English. Some of the flavors are very specifically Korean, like kimchi stew–flavored tuna, or tuna flavored with jjajang sauce (blackbean paste). Although some of the flavors may sound weird, like“mayo tuna” or“vegetable tuna” or “DHA tuna” (an omega-3 fatty acid that supposedly aids in brain function), they are worth trying, as many combinations taste better than they sound.Boxed sets of tuna are common gifts to family, friends, and coworkers at Chuseok (Korean Thanksgiving). At this time of year,people often exchange nicely packaged food gifts, such as cases of pears or persimmons,yellow corvina, abalone, beef, and even Spam and tuna combo boxes.