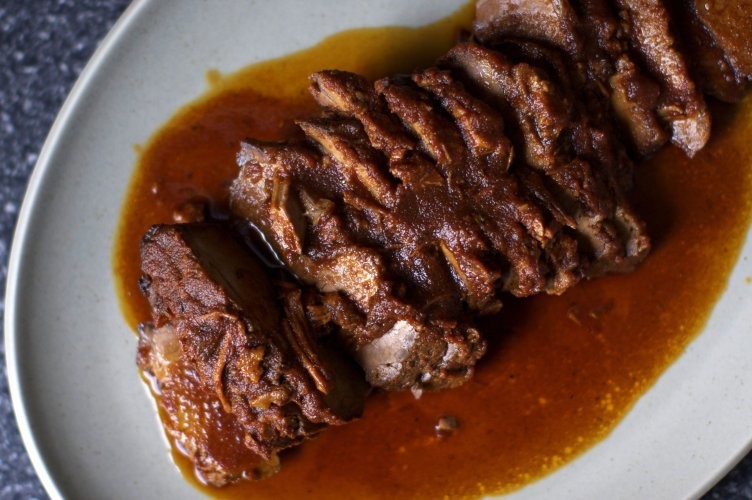 This recipe originally appeared on SmittenKitchen.com

Sure, I’ve pretended that I adapted this from an Emeril recipe but I am pretty sure Emeril wouldn’t recognize what I did with it, from changing every single measurement to ditching steps (like studding the brisket with garlic; I like my brisket uninterrupted) to not straining the sauce (I know! I always thought I was more the sauce straining type too!) because the bits were too tasty to making it in a slow-cooker and deciding browning it had no effect on the final dish and also greatly simplifying the cooking process. So yeah; mostly I just made this recipe up. And it’s wonderful — not just the buckets of flavorful sauce (no dry brisket here!) but the slow-cooker to fridge to oven technique (adapted from my mother-in-law), which produces flawless brisket every single time.

Prepare the sauce: Heat a large skillet over medium high heat and sauté onions in vegetable oil, stirring occasionally, until caramelized and most of liquid has evaporated, about 15 minutes. Add halved garlic cloves and saute for 3 minutes more. Stir in spices and seasoning (paprika, salt, garlic and onion powders, black pepper, cayenne, oregano and thyme) and cook for 2 minutes. Set aside.

In a large bowl, stir together the beef stock, ketchup, chili sauce and brown sugar. Don’t worry if your brown sugar is lumpy (mine always is), the acidity of the ingredients will quickly break it down.

If baking in oven: Preheat oven to 350 degrees. Place brisket in a baking dish or casserole, spread onion mixture over the top, then pour sauce mixture over the entire dish. Cover tightly with foil bake until very tender but not falling apart, about 3 to 4 hours.

For both methods, rest the dish: When the brisket is cooked but still hot, use a spoon to scrape off any large fat deposits adhered to the top and bottom of the brisket. (This part is easiest to do when hot. The sauce will be de-fatted after it has chilled.)

If you’re using a slow cooker, transfer the brisket and all of its sauce to a baking dish. If you’ve baked it in the oven, you can continue in that same dish.

Chill entire dish in the fridge for several hours and up to one day; this resting time will significantly enhance the flavor and texture of the meat.

An hour before you’re ready to serve it: Preheat your oven to 300°F, and remove the dish from the fridge. Remove all of the fat that has solidified with a slotted spoon for a less oily finish.

Carefully remove the meat from its sauce and place on a large cutting board. Cut the brisket into 1/2-inch slices.

If you like a smoother sauce (I do) this is a good time to run it through a blender or literally just smash up the onion and garlic strands with a wooden spoon. They’ll be so soft, that’s all it takes.

Carefully place the sliced meat (moving it in large sections with a spatula helps keep it together) back into the sauce and spoon the sauce over the meat. Replace the lid or cover the dish tightly with foil and reheat in the oven until it is bubbling at the edges — this usually takes up to 30 minutes.

* If you are very strictly kosher for Passover — generally, at an Orthodox level — you’ll want to find versions without corn syrup in them.