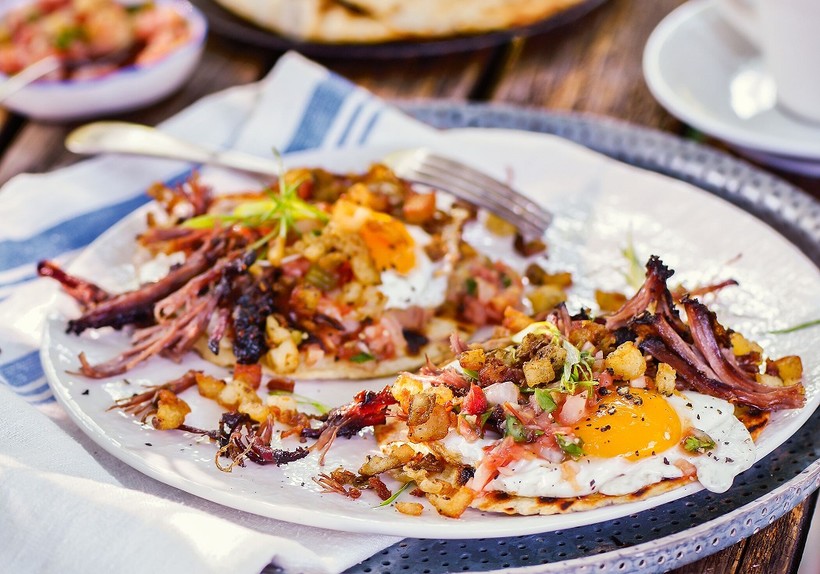 REAL DEAL HOLYFIELD BRISKET BREAKFAST TACOS is excerpted from THE BRISKET CHRONICLES: HOW TO BARBECUE, BRAISE, SMOKE, AND CURE THE WORLD'S MOST EPIC CUT OF MEAT © 2019 by Steven Raichlen. Reproduced by permission of Workman Publishing Co. All rights reserved.

WHAT ELSE: Like much Tex - Mex street food, the Real Deal Holyfield features commonplace ingredients — tortillas, eggs, potatoes, refried beans, and salsa — staples of Mexican American cooking. But it takes a little choreography to put them together for breakfast. I’ve tried to streamline the recipe to the point where you can make it in a single frying pan. (You keep the various components warm on a rimmed sheet pan in the oven.) You’ll need some leftover barbecued brisket and a large cooked potato. A purist would make the tortillas, refried beans, and salsa from scratch, but your favorite commercial versions deliver a pretty awesome breakfast, too. The recipe can be multiplied as you desire — given the setup, it’s easier (or at least more efficient) to make breakfast tacos for many people rather than just a few

When early morning hunger strikes in Austin, you head for a parking lot filled with sheds, trailers, barbecue pits, and sky - blue picnic tables clustered around a cinderblock roadhouse known as Valentina’s Tex Mex BBQ. Proprietor Miguel Vidal grew up in San Antonio, where his dad, like most Texans, staged family barbecues every weekend and his mom made the salsas and tortillas by hand. He worked at various restaurants in Austin prior to opening Valentina’s (named for his daughter) in 2013. “I wanted to elevate the Tex - Mex food I grew up on, while marrying it with Texas barbecue,” says Vidal, who runs the restaurant with his wife, Modesty, and brother, Elias. To this end, he built three massive barbecue pits (named Cobain, Cornell, and Maynard after his favorite musicians). He burns mesquite — not the post oak customary in these parts — resulting in meats with a decisive smoke flavor. His briskets (seasoned with a triple blast of spices, pepper, and salt) go on at 1 a.m. and cook for 14 to 16 hours. On a typical Saturday, he’ll serve 400 pounds of brisket, 200 pounds of pork ribs, and 1,500 house - made tortillas. One morning, Miguel’s father asked for some huevos rancheros. Miguel decided to up the ante, adding brisket and a smoked vegetable salsa. The result was the Real Deal Holyfield, and it delivers a wallop.

This pyrotechnic salsa shows how Miguel Vidal blends Tex - Mex with Hill Country barbecue. He cooks the veggies in the smoker — long enough to infuse them with mesquite smoke, but short enough to keep their vegetal crunch. You can certainly smoke the vegetables ahead of time at a previous smoke or grill session.

The Brisket Chronicles: How To Barbecue, Braise, Smoke, And Cure The World's Most Epic Cut Of Meat

The Brisket Chronicles: How to Barbecue, Braise, Smoke, and Cure the World's Most Epic Cut of Meat