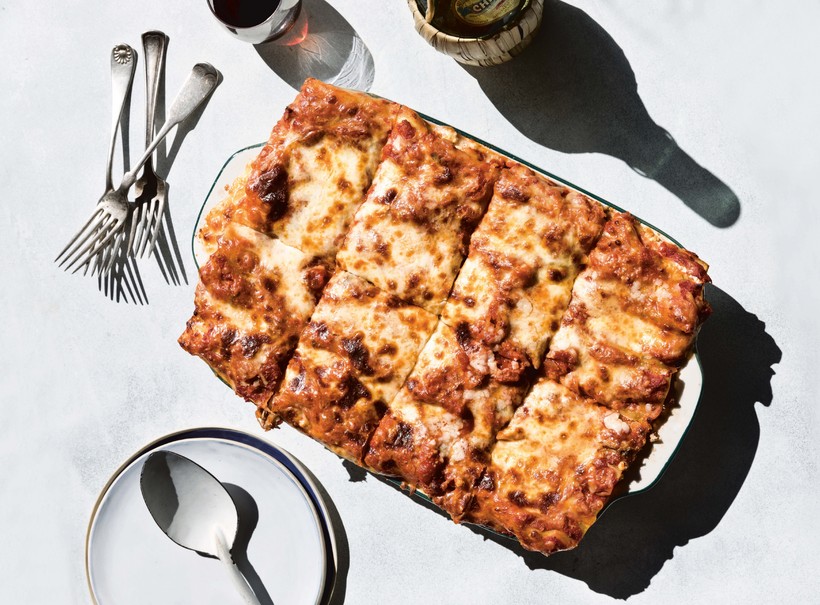 Porchetta-Spiced Pork Shoulder Lasagna is excerpted from Lasagna: A Baked Pasta Cookbook by Anna Hezel and the Editors of TASTE, copyright © 2019. Published by Clarkson Potter/Publishers, an imprint of Penguin Random House.

In central Italy, hulking pork roasts known as porchetta are cooked for hours with rosemary, fennel, and garlic and sold as a street food—the juicy slices shaved onto sandwiches. In Philadelphia, you can find this pork on sandwiches full of broccoli rabe and Provolone. But making porchetta at home is a bit of a production. It involves brining, rubbing, rolling, and tying a large cut of pork belly—all before it actually goes in the oven. In this recipe, we channel porchetta’s dreamy personality (and juiciness and spices) with a simple pork shoulder that gets braised in white wine, creating a tender shredded filling for a red sauce lasagna.

1. Make the porchetta-spiced pork: In a medium Dutch oven or enameled cast- iron casserole, heat 2 tablespoons of the oil over medium heat until shimmering, about 2 minutes. Season the pork with the salt and black pepper and cook in batches, turning the pieces as needed, until they are browned and crusty all over, 8 to 10 minutes. Transfer the browned pork to a plate with a slotted spoon and brown the remaining meat, adding the remaining 2 tablespoons of oil to the pot. Transfer to the plate when done.

2. Meanwhile, place the chopped garlic, fennel seeds, and chopped rosemary on a cutting board and continue to chop them together until uniformly fine. Add the mixture, along with the red pepper flakes, to the pot used to cook the pork, and cook over medium heat, stirring, until fragrant, about 1 minute.

3. Add the wine and cook until reduced by half, 2 to 3 minutes. Return the meat to the pot along with any accumulated juices. Add the broth and bay leaves and bring to a boil. Reduce the heat to medium low and simmer, partially covered, until the pork is very tender, about 1 hour. Discard the bay leaves and transfer the pork to a bowl. Spoon off as much fat from the surface as possible and boil the remaining liquid over medium-low heat until reduced to a few tablespoons, 5 to 6 minutes. Return the pork to the pot and cook, stirring, over low heat until the liquid is nearly evaporated, about 3 minutes. Use a wooden spoon to press on the pork and coarsely shred it.

4. Make the cheese mixture: Preheat the oven to 375°F. In a large bowl, combine the ricotta, parsley, ¼ cup of the Parmesan, and two thirds of the mozzarella (reserve the remaining cheese for the top) and season with the salt and black pepper. Add the egg and stir to combine.

5. Assemble the lasagna: Spread ½ cup of the red sauce in the bottom of a 9 x 13-inch (3-quart) glass or ceramic baking dish. Arrange 5 of the noodles, overlapping slightly, in the dish. Top with ½ cup of the red sauce. Spoon half of the ricotta mixture on top, spreading to an even layer. Top with half of the shredded pork. Arrange another 5 noodles on top, followed by another ½ cup red sauce, the remaining ricotta mixture, and the remaining pork. Arrange the remaining noodles on top, pressing to compact slightly, and spread with 1 ½ cups red sauce.

6. Bake the lasagna: Sprinkle the remaining mozzarella and Parmesan on top and bake until the top is browned and crusty around the edges and bubbling, about 45 minutes. Let the lasagna rest for 20 minutes before cutting into squares. Serve the remaining red sauce on the side.

Having a few jars of red sauce in the refrigerator or freezer is like having the security of a little extra money saved away in the bank. Not only does this incredibly versatile ingredient come in handy when you’re facing a dinner-related emergency, but it also whittles away your prep time when making a more involved baked pasta or lasagna. This sauce is simple, vegetarian, and adaptable—and the focus is on the flavor of the canned tomatoes themselves. So whether you’re throwing together a Baked Ziti or constructing an Eggplant Parm Lasagna, this is the sauce that will have your back.

1. Using kitchen shears, cut the tomatoes in the can until finely chopped. Heat the olive oil in a large saucepan over medium-high heat until shimmering, about 2 minutes.

3. Add the canned tomatoes and their juices, the sugar, oregano, bay leaf, and 2 cups water. Break up any large pieces of tomato with a spoon. Season with 1 teaspoon salt and a pinch of pepper and bring to a boil.

4. Cover the saucepan partially, reduce the heat to medium-low, and simmer until the sauce is thick and reduced to about 4 ½ cups, 35 to 40 minutes. Season to taste with salt and pepper. Discard the bay leaf. The sauce can be refrigerated in an airtight container for up to 4 days, or frozen for up to 3 months.