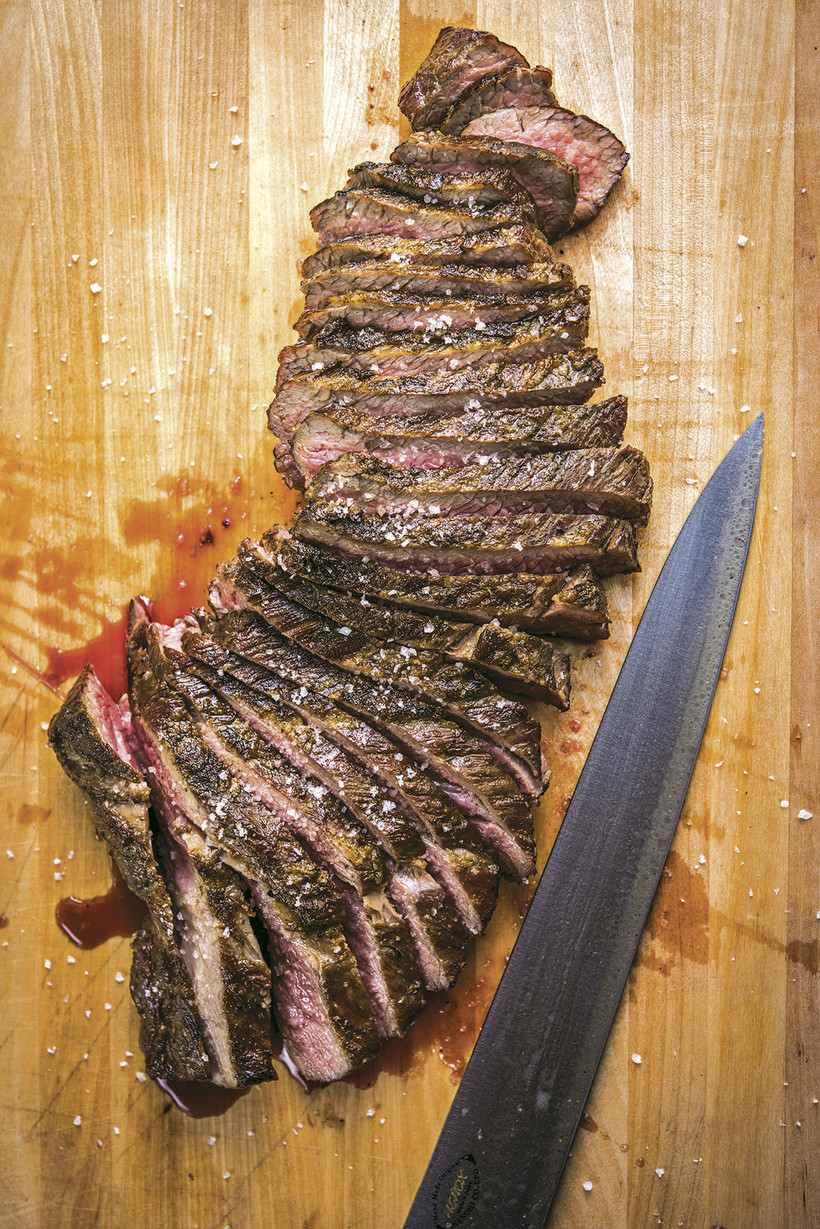 [RECIPE] How To Cook Flank, Skirt, And Strip Steak

Another flat, broad steak, the flank comes from the belly of the animal, where, as part of the abdomen, it does quite a bit of work. “Flank steak can be tough,” says Bryan,“ but if you get a good marble done, it’s delicious.” The flank is notable for the distinctly coarse grain running down its length. Judge a good one by looking for telltale white marbling generously dispersed through the grain. Although it can be tough, the flank’s got good flavor, and precise cooking makes it extremely easy to eat. If it’s lean or tough, just slice it more thinly than you normally would for serving.

The flank’s big flavor and obvious grain take especially well to grilling, as the licks of fire and smoke penetrate into the heart of the meat. As long as you don’t cook it past medium-rare, it’s rewarding. Flank steaks are cheap and great for parties, as they cook quickly and consistently. Just don’t forget to slice them thinly for serving—and only across the grain.

The skirt is one of the most confusing steaks of all because it’s not actually singular. There are two skirts, and they’re different. The inside skirt is called that because it lies inside the body cavity, where its job is to compress the abdomen. The outside skirt is attached to the diaphragm, which it moves. Both are long, thin, and ribbon-like, with the inside skirt being about 30 percent wider. “Any of those diaphragm muscles do work,” Bryan explains. “They expand and contract millions and millions of times [over the life of the animal]. That’s how they get flavor.” But the two skirts are not created equal. “Of the two skirts on the carcass, the outside is the one you want,” says Bryan. “It’s much more tender than the inside.” Both have flavor, but the out-side skirt, in addition to being more tender, has even more flavor. Although these are usually very cheap cuts, the outside skirt of a cow that’s been raised well can have significant marbling.

Best used for fajitas or stir-fries, the inside skirt inevitably needs marinating or some other form of tenderization (pounding, perhaps) to make it easier  to eat. At Salt & Time, after marinating, the inside skirt often gets rolled into a pinwheel, tied with a string, and sold as spiral rounds, which can be cooked like steaks, but “only if it’s high-quality meat,” cautions Bryan. “Also, it should get some mechanical tenderizing, lots actually—like a mallet or meat tenderizer device. Most skirts sold at grocery stores come tenderized already. [And] a good marinade with high acid helps.” After cooking the pin wheel, just unwind the meat and cut it into thin, easily chewable slices (though the meat will still be chewy). The outside skirt, if it is high quality, doesn’t need special treatment. It can be cooked simply as a steak, though it shows best when cooked medium-rare to medium on the grill.

No matter the name, this is a flavorful, luxurious steak that has a tight grain, not too much fat, and a lot of flavor. If it’s possible that one of the most iconic of all steaks could be underappreciated today, the New York strip is it.

Most strips are thin enough that cooking them conventionally on a medium - hot grill or stove-top griddle should allow the formation of a nice crust without over- or under-cooking the exterior. Medium-rare is the goal. These are great as individual steaks: they’re not too big, feeding one person generously.