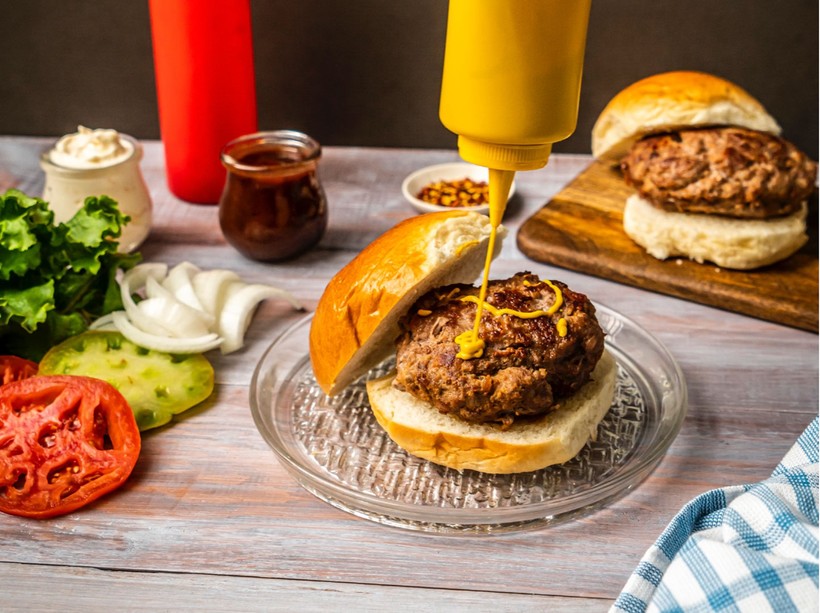 HAMburger is excerpted from "Modern Freezer Meals" by Ali Rosen.

Sometimes I get a little giddy from a silly idea that actually works. The HAMburger was one of those ideas. I ran it by my brother over the phone and I kept saying the word as though it was brilliant. "Yeah, it's going to be a burger but with actual ham! A HAM-burger!" Of course, just because the pun was funny didn't mean the actual recipe would be good, but once I made it, I was surprised we didn't do this more. For a culture obsessed with ground meat between a pun, why are we so stuck on beef? The secret to this burger is in doubling up on the pork and adding soy and Worcestershire sauces for some extra oomph. So, no you can have a delicious recipe and a silly pun.

In a pan on medium-high heat, cook the bacon for 5-7 minutes. It is done when it is cooked enough to eat but not yet crispy. Set it aside to cool. Add the bacon into a bowl with the ground pork, salt, soy sauce, and Worcestershire sauce. Combine fully, then form into patties.

Wrap each of the patties tightly in plastic wrap, then aluminum foil. Place them all in a resealable freezer bag and put them in the freezer for at least 1 hour before cooking, up to 1 month.

When you are ready to cook, put a large skillet or Dutch oven on medium heat and add the oil. Heat the oil until it is 330F to 350F. If you don't have a thermometer, you can test with a wooden spoon or chopstick -- if bubbles form around the spoon or chopstick in the oil, then the oil is hot enough. You don't want it to be boiling or too bubbly here, so try to always check the temperature.

Fry the HAMburgers for 6-8 minutes, then turn them over and fry them again for an additional 5-6 minutes. If your skillet is not large enough for all the patties, add more oil as needed and fry another batch the same way (making sure to bring the oil back up to temperature). Serve with hamburger buns and condiments as needed.