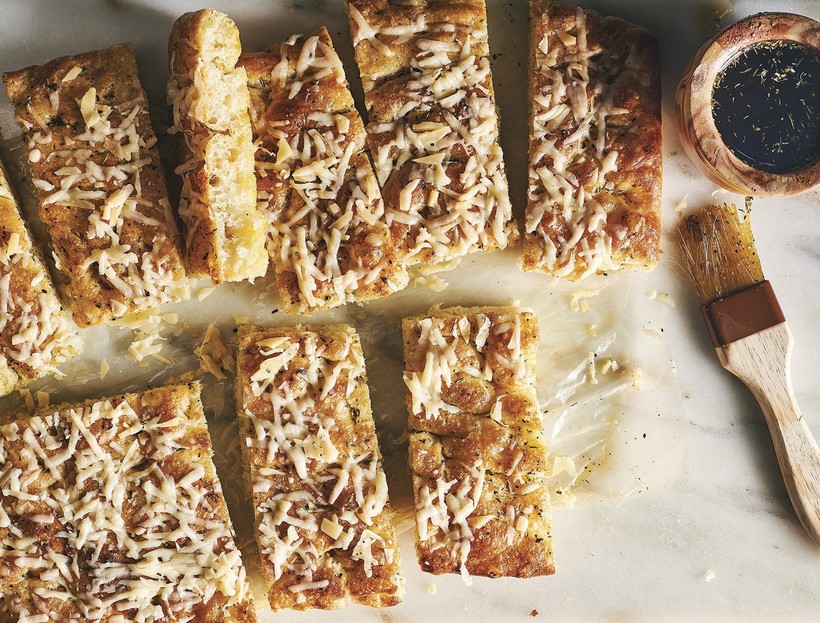 MAKES 1 SHEET PAN OR 2 TO 3 ROUND FOCACCIA

This is the most basic and, many say, still the best version of focaccia, unadorned with toppings other than flavorful herb oil. It can be eaten as is, dipped into marinara sauce, or used as an accompaniment with pretty much any dish. What I love about it is that

it showcases the beauty and delicious flavor complexity of the dough, demonstrating why the greatest joy derived from pizza is found in the crust, not the toppings. When properly made, the internal structure of each slice will have a honeycombed, shiny appearance and a soft, creamy texture, sandwiched between a crackly, toasty under- crust and a flavorful thin-but-chewy top crust.

Replace the Herb Oil with 1 to 1½ cups of either the Crushed Tomato Pizza Sauce (page 46) or All-Purpose Marinara Pizza Sauce (page 49). Just before baking, drizzle the sauce over the dough and gently spread it over the top with a pastry brush or the back of a tablespoon. Bake as described for the Bianca, but allow an extra 4 to 5 minutes of baking time to cook the dough under the sauce.

Perfect Pan Pizza: Square Pies to Make at Home, from Roman, Sicilian, and Detroit, to Grandma Pies and Focaccia