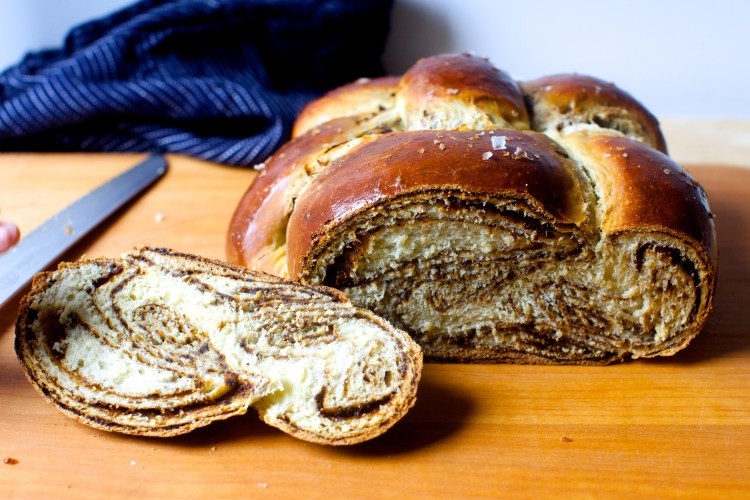 This recipe originally appeared on SmittenKitchen.com

This idea of a fig, olive oil, and sea salt challah came to me one day when my tiny (!) newborn Jacob had fallen asleep in my arms again and like all silly new mamas, I felt a little bummed because there was so much I’d hope to get done but I was now glued in place for a while. It lived in the back of my head through all those early sleepless nights and the flummoxed daytimes when I thought, “No way I am ever going to have time to cook again.” And about six months later, when I finally had the chance to make it happen, I sprung forth into the kitchen and, well, I’d like to tell you it was a home run. All of that pining had to amount to something, right?

The challah always tasted good, but there were logistical challenges across the board as tried to figure out how to insert figs into a challah without dotting the dough with unpleasant fig lumps or having such an elaborate assembly that nobody would ever bother with it. I even put it down for several months, concluding that not all premonitions that come to you while on human crib duty are meant to be. And then last year, I made you an Apple and Honey Challah and figuring the logistics of apple-ing up that challah is what finally made the fig version click for me. Finishing the challah from there was a cinch. Okay, I lied. It still took four more rounds. I began showing up at preschool drop-off with gigantic, still warm-from-the-oven challahs to dump on the other parents because I could no longer fit them in my kitchen.

But, it had a happy ending. This may not be a challah our grandparents may recognize, it may even be a little risky to suggest that one would shirk tradition (often, round raisin challahs for the New Year) for something with a little imported sea salt, but I will go out on a limb for this challah. I think it’s worth it. And should any of it survive the evening meal, I want you to know that its leftovers make the finest French toast we’ve yet to have — especially good with a hint of orange zest, drizzle of warm honey and dollop of fresh ricotta on top.

New note (2018): Feel free to use instant yeast here instead of active dry. Use the same amount and then skip the warm water step (room temperature is fine); it’s not necessary with instant yeast. I do find that the first rise can take longer, but after that, the rising times even out. Let me know how it goes for you if you use it.

To make dough with a stand mixer: Whisk the yeast and 1 teaspoon honey into warm water, and let it stand for a few minutes, until foamy. In a large mixer bowl, combine the yeast mixture with remaining honey, 1/3 cup olive oil, and eggs. Add the salt and flour, and mix until dough begins to hold together. Switch to a dough hook, and run at low speed for 5 to 8 minutes. Transfer the dough to an olive-oil coated bowl (or rest the dough briefly on the counter and oil your mixer bowl to use for rising, so that you’ll use fewer dishes), cover with plastic wrap, and set aside for 1 hour, or until almost doubled in size.

To make the dough by hand: Proof the yeast as directed above. Mix the wet ingredients with a whisk, then add the salt and flour. Mix everything together with a wooden spoon until the dough starts to come together. Turn the mixture out onto a floured counter, and knead for 5 to 10 minutes, until a smooth and elastic dough is formed. Let rise as directed above.

Meanwhile, make fig paste: In a small saucepan, combine the figs, zest, water, juice, salt, and a few grinds of black pepper. Bring to a simmer over medium heat, and cook, stirring occasionally, until the figs are soft and tender, about 10 minutes. Season with salt and pepper to taste. Remove from heat, and let cool to lukewarm. Process fig mixture in a food processor until it resembles a fine paste, scraping down the sides of the bowl as necessary. Set aside to cool.

Insert figs: After your dough has risen, turn it out onto a floured counter and divide it in half. Roll the first half of the dough into a wide and totally imperfect rectangle (really, the shape doesn’t matter). Spread half the fig filling evenly over the dough, stopping short of the edge. Roll the dough into a long, tight log, trapping the filling within. Then gently stretch the log as wide as feels comfortable (I take mine to my max counter width, a pathetic three feet), and divide it in half. Repeat with remaining dough and fig filling.

Weave your challah: Arrange two ropes in each direction, perpendicular to each other, like a tight tic-tac-toe board. Weave them so that one side is over, and the other is under, where they meet. So, now you’ve got an eight-legged woven-headed octopus. Take the four legs that come from underneath the center and move the leg to their right — i.e., jumping it. Take the legs that were on the right and, again, jump each over the leg before, this time to the left. If you have extra length in your ropes, you can repeat these left-right jumps until you run out of rope. Tuck the corners or odd bumps under the dough with the sides of your hands to form a round.

Transfer the dough to a parchment-cover heavy baking sheet, or, if you’ll be using a bread stone, a baker’s peel. Beat egg until smooth, and brush over challah. Let challah rise for another hour, but 45 minutes into this rise, preheat your oven to 375°F.

Bake your loaf: Before baking, brush loaf one more time with egg wash and sprinkle with sea salt. Bake in middle of oven for 35 to 40 minutes. It should be beautifully bronzed; if yours starts getting too dark too quickly, cover it with foil for the remainder of the baking time. The very best way to check for doneness is with an instant-read thermometer — the center of the loaf should be 195 degrees.

Cool loaf on a rack before serving. Or, well, good luck with that.