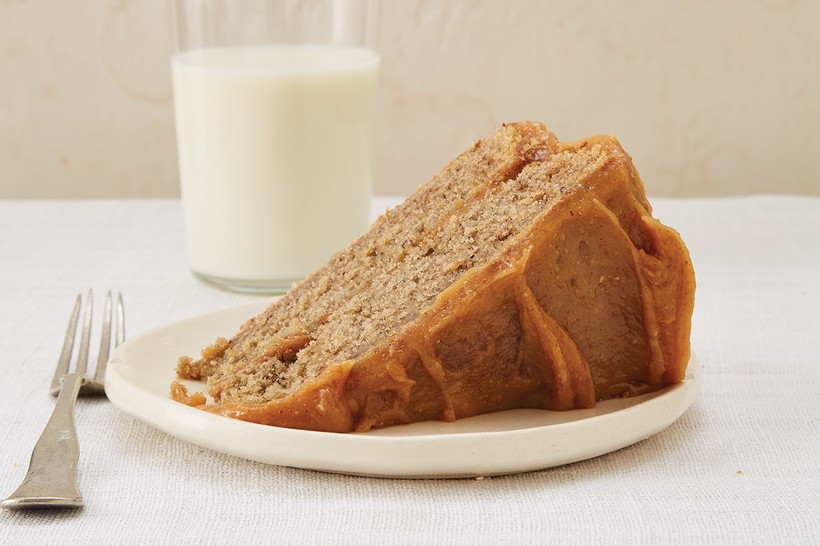 This cake is lightly adapted from my paternal grandmother’s (G.G.’s) banana cake recipe. Well, I think of it as my grandmother’s recipe, but it was actually her mother’s or her mother-in-law’s... either way, it lasted through the generations for a reason. It was a special cake that she would make for my father’s birthday, as it’s his favorite cake (and mine, too). The major difference between this cake and hers? Mine is made with banana peels (yes, really) instead of bananas. It’s a simple-seeming cake (no vanilla?! not a spice to be found?!), but it tastes just like your favorite banana bread.

2. To make the cake: Cut the banana peels into 1-inch pieces and place them in a small saucepan with 1 cup of water. Bring to a boil over medium-high heat, then reduce the heat and simmer for 10 minutes. Remove the pan from the heat and allow the mixture to cool slightly, then strain the banana peels, reserving T cup of the cooking water.

4. Transfer the peels and the 1/4 cup of cooking water to a tall, narrow container and puree until completely smooth with an immersion blender (a mini food processor would do the trick, too!).

5. Cream together the butter and sugar using an electric mixer (or a wooden spoon for an arm workout) until pale and fluffy, about 3 to 5 minutes. Add the egg yolks one at a time, mixing until incorporated, and scraping down the sides of the bowl after each addition. Mix in the banana peel mixture, then stir in the buttermilk until well combined.

6. In a separate medium-size bowl, whisk together the flour, baking soda, baking powder, and salt. Add the dry ingredients to the bowl with the butter mixture and stir gently, just until combined.

7. Put the egg whites in another bowl (make sure it’s clean and dry!) and whisk until soft peaks form—either by hand or with the whisk attachment on an electric mixer. If using an electric mixer, start slowly and gradually increase speed to medium-high. You’ll know you’re done when you pull out the whisk or beater and a soft peak is formed, but immediately collapses. Gently fold the egg whites into the batter and divide the batter evenly between the two prepared pans.

8. Bake for about 25 minutes, rotating the pans halfway through, until the top is golden and a toothpick inserted into the center of the cake pulls out with dry crumbs rather than wet batter. Let the cakes cool completely in the pans.

9. To make the frosting: Mix together the Greek yogurt, creamy peanut butter, and 1/4 cup of the whole milk with an electric mixer. Gradually add 1 1/2 cups of the powdered sugar and mix until smooth. If the frosting is too thick, add more of the milk; if it’s too loose, slowly add the additional powdered sugar until it reaches a spreadable consistency.

10. When the cakes are completely cool, remove from the pans and peel off the parchment. Put one layer of the cake on a serving platter and spread about one third of the frosting evenly over the top. Set the other layer on top, and spread the remaining frosting over the top and sides of the cake.

Cooking with Scraps: Turn Your Peels, Cores, Rinds, and Stems into Delicious Meals

Cooking with Scraps: Turn Your Peels, Cores, Rinds, and Stems into Delicious Meals