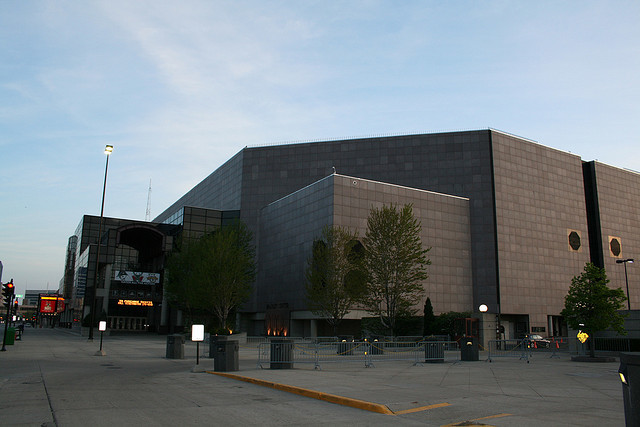 The Milwaukee Bucks' lease with the BMO Harris Bradley Center is set to expire soon.

Reception For Bucks Arena Financial Plan Has Been Polarized

Walker's Proposal Has Been Met With Opposition In Legislature
By Chuck Quirmbach
Share:

Gov. Scott Walker's proposal for a new basketball arena in Milwaukee has become something of a jump ball: Milwaukee land developers want state lawmakers to tip the package forward, but others want to bat it back or introduce new conditions to the deal.

Usually, when governors and key lawmakers announce a financing package for a project, it's smooth sailing. That appeared to be the case a couple weeks ago, when Walker and other Republican leaders announced their "Cheaper to Keep Them" plan for the new Milwaukee Bucks arena.

Walker and others spelled out the general proposal: $80 million in borrowed dollars from the state, plus financing from Milwaukee County, the City of Milwaukee and the Wisconsin Center District. Current and past owners of the Milwaukee Bucks would still put up the other half of the funding — $250 million, plus pay for any cost overruns. But in Madison, Milwaukee and elsewhere, liberals who don't want tax money to help wealthy team owners have joined with conservatives who don't want tax money to go toward basketball in opposition to the plan. This week, Assembly Speaker Robin Vos said that his fellow Republicans need to see details for the plan, and that he doesn't yet have the Republican votes for the arena package.

"I think there are always folks who have concerns about big projects like this, when it's especially directed at one part of the state," said Vos. "Even though people from all across Wisconsin can attend something at the Bradley Center, I think we can be honest and say it's mostly people who live from Madison, east."

Senate Republicans are likewise divided over the plan — a holding pattern that's been noticed by some pro-arena businesspeople in Milwaukee. Mike Ruzicka and about a dozen other leaders of the real estate and construction industries recently held a news conference on the gravel lot that could be turned into the proposed $500 million dollar arena, with hundreds of millions of dollars more in related projects nearby. At the event, Tammy Maddente of First Weber Group-Wisconsin downplayed local concerns that Milwaukee County would sell the arena site to the Bucks for $1.

"The dollar here is a deal, because of the catalytic development that will occur because of the Bucks and the millions it will bring to city, county and state government," said Maddente.

The proposed land sale is just one of the local concerns that have been raised about the governor's arena financing plan. Another question is whether a fair percentage of construction work would go to Milwaukee firms owned by or that employ black and Latino people.

Angela Walker of Wisconsin Jobs Now also wants agreements that workers inside the new arena would receive a living wage. She said that it has to be "a good deal for all involved, and that workers' needs are centered from construction to end-use jobs."

Some people say that the arena needs to be built because the Bucks are getting better, and ought to get a new facility. On Thursday, the Milwaukee Bucks tried out college players hoping to be chosen in this month's pro basketball draft. One of them was former Wisconsin Badgers star Josh Gasser, who grew up north of Milwaukee in Port Washington.

"Getting a new arena, getting these new jerseys, new players, a new coach, in the past couple years — that's where the buzz starts to come," he said.

For now, state and Milwaukee-area officials may be debating the arena issues for weeks — especially if Republicans take the financing package out of the state budget and put it in separate legislation.