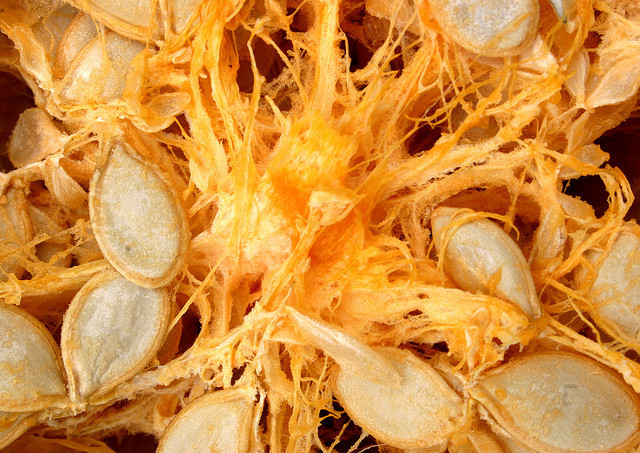 Gete Okosomin Was Only Recently Discovered By Archaeologists
By Cheyenne Lentz
Share:

Gete (GATE-ay) Okosomin (oh-COHS-suh-min) is Ojibwe for "really cool squash." According to Kevin Schoessow  — an agricultural development agent with the University of Wisconsin-Extension — it's the perfect name to describe an ancient kind of squash that was only recently discovered in Wisconsin.

"The story goes, about 10 years ago, there was an archaeological dig somewhere in the Green Bay area or in Menominee territory, and they found a clay vessel — a clay ball," said Shoessow. "And they picked it up, and lo and behold, it had a little rattle."

When the researchers cracked the ball open, Schoessow said, they found squash seeds within. They estimated that the ball had been preserving the seeds for about 800 years.

But perhaps even more remarkably, researchers also found that the seeds were still viable. Flash forward to today, and five generations of the squash known as Gete Okosomin have been produced.

Having been given one of the fruit as a gift from the Lac Courte Oreilles tribe, Schoessow likened the flavor to that of an acorn squash, but much sweeter. The shape, he said, is similar to that of a banana squash.

"The one I had was only six-and-a-half pounds, but they grow closer to 18 or 20 in the first generation," Schoessow said.

The seeds thus far have been shared with just a select few in order to protect indigenous culture and foods, he said. However, people will soon be able to see the squash on display at the Teaching and Display Garden at the Spooner Agricultural Research Station.

"We really just want to kind of just honor the heritage of this particular squash," Schoessow said. "There’s a lot of cool heirloom varieties that we need to bring back and that’s exactly what we’re trying to do with this one."