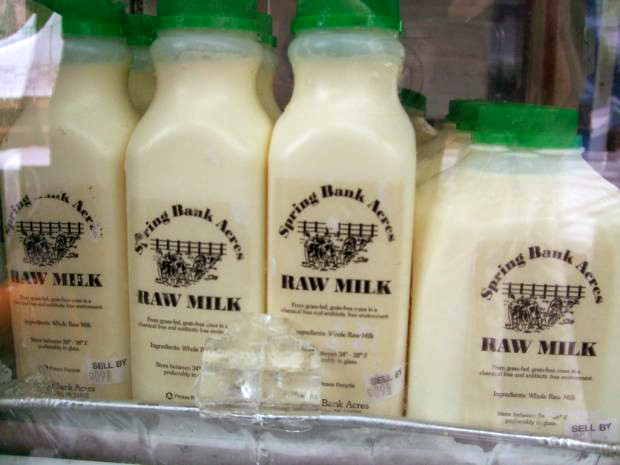 Loiselle: Unpasteurized Milk Is Safe To Take Off Farm
By Christie Taylor
Share:

Would you drink unpasteurized or raw milk? For some Wisconsin residents, fighting for the right to do so is a campaign not just about milk, but food choice as a whole.

Gayle Loiselle, a food rights activist from Dousman, is a plaintiff in one of three petitions by farms asking the Wisconsin Supreme Court to recognize raw milk sales agreements between farmers and private citizens as legal and constitutional. The petitions seek to reverse decisions prohibiting the three farms from selling milk to interested buyers.

But Loiselle said on Thursday that the petitions have a bigger aim in mind.

“The goal is to recognize that it is a basic human right to choose what we eat and where we get that food from,” she said. “Why shouldn’t I be able to choose what to feed my family?”

“I don’t need to pay taxes to have the government figure out what I can eat,” she added.

The state Department of Agriculture, Trade and Consumer Protection generally prohibits the sale – whether to an individual customer or a "food club" of individuals pooling their money – of raw milk on the basis that the unpasteurized product poses too much of a disease risk.

Loiselle, however, said the safety concerns were exaggerated, pointing to other foods such as peanut butter and cantaloupe that have been involved in nationwide recalls and which have caused deaths.

“Any food is subject to being contaminated,” she said. “On a whole, fresh raw milk is easy to produce cleanly and safely.”

She said farmers took better precautions when they knew milk wouldn't be pasteurized, making the milk safer in the long run.

“The cows are handled very differently,” Loiselle said. “They’re out on pastures as often as possible, it’s much cleaner. The farmer knows it’s going directly into the human food chain and they take every precaution along the way.”

In contrast, she said, pasteurized milk was more likely to come from a large dairy operation, or at least a less careful one.

“Pasteurized milk consumes antibiotics, growth hormones, residues of herbicides and pesticides, lots and lots of bodily fluids that would never be allowed into raw milk,” she said.

Loiselle acknowledged that she herself had been sickened by consuming raw milk – but only once, from a farm with a 50-year history of high quality and no incidents.

“And this one time, there was an incident,” she said.

Ultimately, she said, she thought state officials were presenting a mixed message on why they were outlawing sales.

“The state statutes allow for incidental sales,” Loiselle said. “If it was such a hugely dangerous thing, why would they even allow for that? Why is it I can drink it on the farm but I can’t drink it off the farm?”

As for why she was so dedicated to the cause in the first place, Loiselle said she bought into the many health claims that have been made about raw milk, including that it reduces allergies and asthma.

And finally, she added, “It tastes really good.”