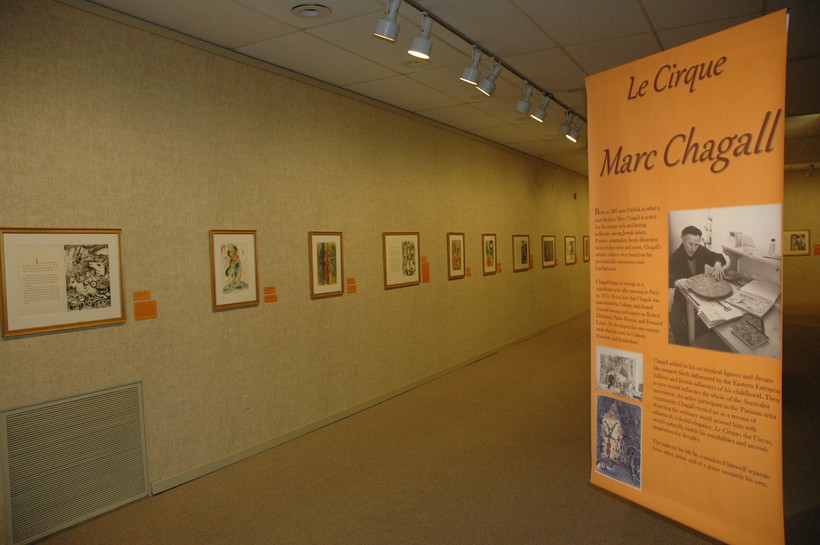 Exhibit for Le Cirque collection by Marc Chagall at the Rahr-West Art Museum in Manitowoc, Wisconsin.

Le Cirque Collection Thought To Be Shown Publicly Together For First Time
By Patty Murray
Share:

A museum in northeastern Wisconsin is displaying a rare collection of prints by 20th-century artist Marc Chagall. The Rahr-West Art Museum in Manitowoc is thought to be the first to display the complete 38-piece Le Cirque series by the famed Russian-French artist who lived from 1887-1985.

"To be able to bring Le Cirque, a collection that is internationally known, to Manitowoc, Wisconsin, through the Rahr-West Art Museum and to be able to share it with the world, we're just very, very fortunate to do it," said museum Director Greg Vadney.

Thirty of the 38 lithographs came from a donor in the 1980s, Vadney said. The museum acquired the last eight prints at an auction last year for $130,000 at the Christie's Auction House, he said.

Chagall's Le Cirque collection from 1967 centers on circus performers and has Wisconsin-related connections considering the Baraboo Circus Museum and the final performance of the "Greatest Show on Earth," said Vivian Jacobson, who worked with Chagall in the late 1970s as a volunteer marketing manager for some of the artist’s American works.

"This year (the) Ringling Brothers is closing the circus, so here you have a whole exhibition that displays the circus," Jacobson said. Jacobson views the collection as images of the "balancing acts" people, especially women, do in their daily lives. She described the Jewish artist as a "good guy."

In the 1930s, Nazis confiscated artworks mostly by Jewish modern artists, and the artists’ lives were endangered, she said.

"He was considered a degenerate artist," she said.

Vadney, the museum director, said at least three other states are interested in displaying the exhibit and the The Rahr-West museum plans to send the exhibit to other cities for public display.

Only 250 copies of the series were made in 1967, most of the collections were broken up.

Editor's Note: Rahr-West Art Museum is an underwriter of WPR.