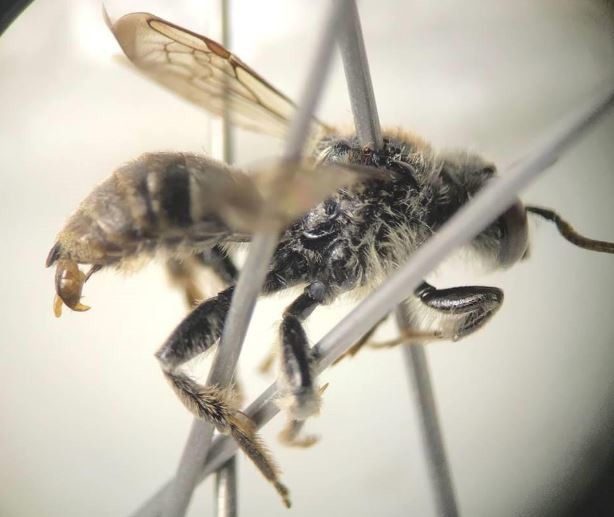 Ever feel like you’re doing all the work and someone else is reaping the benefits? The Macropis bee can relate.

Scientists with the U.S. Forest Service recently discovered one of the most rare bees in North America in the Chequamegon-Nicolet National Forest. The Epeoloides pilosulus bee was discovered in mid-July by scientists who were surveying the pollinators as part of an inventory of native bees in the Great Lakes region. There are only two known species of Epeoloides in the world.

The rare bee is often referred to as a cuckoo bee because it's a pollen thief.

The bee is a cleptoparasite that mooches off the oil and pollen collected by the Macropis bee for its young, according to Joan Milam, an adjunct research fellow in the Department of Environmental Conservation at the University of Massachusetts in Amherst.

"Instead, this cuckoo bee slips in, lays its egg, that egg hatches to a larvae, and it eats up the provisions," said Milam. "So, the Epeoloides didn't have to do any of the work."

The U.S. Forest Service said the bee hasn’t been confirmed in Wisconsin since it was caught in Dane County back in 1910. The pollinator was thought to be extinct until it was spotted in Nova Scotia, Canada, in 2002. The insect is listed as endangered in Canada. The bee has been confirmed in just a few states in the U.S., including Connecticut, Massachusetts and Maryland. Milam said they were working with the U.S. Forest Service as part of a project funded by the Great Lakes Restoration Initiative (GLRI). They've been working with forest managers on bee surveys of six forests across several Great Lakes states, including Wisconsin, Minnesota and Michigan.

Agency scientists netted three of the bees on black-eyed Susan plants along forest roads in the Lakewood-Laona Ranger District this summer. Two were captured at the Chickadee Barrens in the Chequamegon-Nicolet National Forest.

Habitat restoration in the district might be helping bees to thrive there, according to forest spokeswoman Hilary Markin.

"They're doing a lot of clear-cutting to take the trees off to build that barrens habitat, which of course is creating more wildflowers and such that the bees like and increasing the pollinators that are visiting that area," said Markin.

Milam said the Chequamegon-Nicolet National Forest has the right combination of plants for the Macropis bee to feed its young known as Lysimachia — a genus that includes plants that often grow yellow flowers.

"It has a lot of that plant so it can support a lot of the Macropis," she said. "When you have a healthy community with a lot of host species, then there is enough for a cleptoparasitic bee to slip in, lay its egg and take off."

Milam said the surveying effort is part of increased awareness of bees and heightened surveillance after reports surfaced of bee colonies collapsing in 2006, raising fears over the long-term survival of bees.

"The reason bees are important is they support our natural ecosystems because they pollinate the plants and the plants hold the soil together and they provide berries and nuts for other animals," said Milam. "They're considered keystone species — all of them — whether they’re a cleptoparasite or a pollen-provisioning bee."

Some beekeepers reported losing 30 to 90 percent of their hives in the winter of 2006-2007. However, reported cases of Colony Collapse Disorder have declined substantially over the last five years, according to the EPA.

This is the third and final year of the bee surveying as part of the GLRI-funded project. The U.S. Forest Service has received $81.5 million for 138 projects funded by the Great Lakes Restoration Initiative as of October last year. Wisconsin is home to around 500 native bee species.