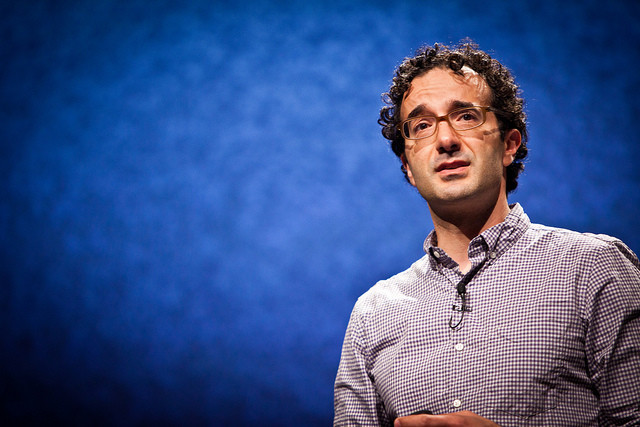 Jad Abumrad was in Madison Monday to deliver a public lecture on innovation. Photo: PopTech (CC-BY-SA).

It's hard to believe that Jad Abumrad, host of the popular NPR radio show "Radiolab" and a MacArthur genius, suffers a gut-churn of doubt at times. However, he says that he’s learned to accept that self-doubt as a natural product of trying out new things in the creative process.

Abumrad was in Madison on Monday night to deliver a public lecture about how he uses dark, biting insecurity as fuel for innovation when producing stories for “Radiolab,” a program known for its quirky approach to science. (It airs on WPR's Ideas Network at 3 p.m. on Saturdays.)

Back in 2002, when Abumrad launched "Radiolab," he remembers that anxiety sometimes riddled him to the point where it stunted, if not paralyzed, his ability to produce radio. Those feelings still arise during the creative process — now, he just doesn’t fight it. Instead, he interprets their significance differently, and manages them by relying on the fascinating tricks of other cultures.

To explore those interpretations, Abumrad interviewed a wide variety of people, from poker players to Cherokee shaman, all of whom recognized a utility in the self-doubt involved in the creative process, and strategies to defeat it.

The Cherokee for example, said Abumrad, recognize there’s a difference between catalytic stress and the kind that pushes you into paralyses. Their shamans believe that the only response to any fear that has been handed to you from the outside is to kill it.

“You can’t negotiate with it. You can’t listen to it. You’ve just got to kill it!” Abumrad said.

Cherokee are trained to hunt for the “dark spirit” during lucid dreaming. By eliminating the fear there, it cannot externalized.

“I wish I would have known about the Cherokee before. It’s changing the way I work,” Abumrad said. “It’s making me think differently about managing a group through a process of uncertainty, and it might just be worth speaking about out loud.”