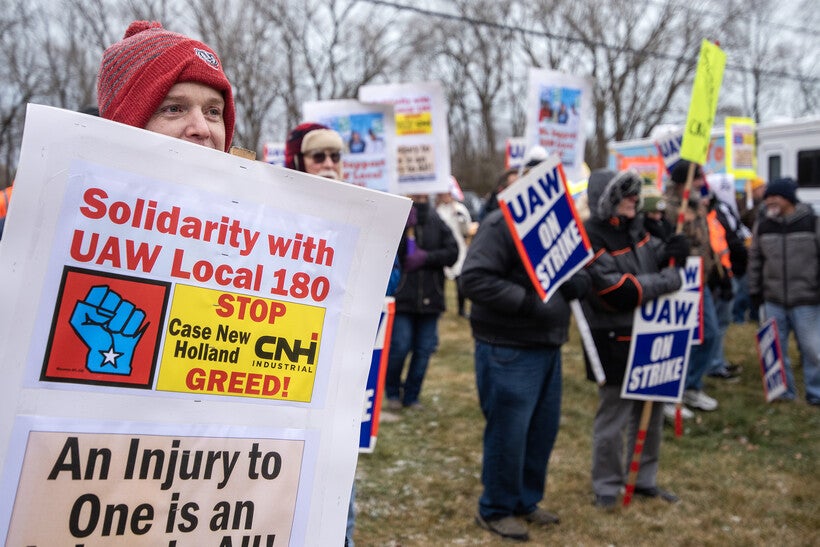 Union collects donations for workers ahead of Christmas holiday
By Joe Schulz
Share:

More than 100 people gathered Saturday at the United Auto Workers hall in Racine to stand in solidarity with the nearly 700 Case tractor factory workers who have been on strike for eight months.

UAW Local 180, which represents workers at CNH Industrial in Racine, held a rally outside the union hall before participating in a vehicle caravan that supported those on strike outside the plant.

"It would be a fabulous Christmas present to my members to get a fair agreement," said Yasin Mahdi, president of UAW Local 180, during the rally. "180 is on strike right now, but it could be any one of you guys later on in the future. And I've never seen a union ask for something that they didn't deserve."

Saturday’s solidarity event also featured a children’s toy drive and a non-perishable food drive to support the workers during the holiday season.

Workers have been on strike since May 2, and negotiations stalled back in September as the company and union have been unable to reach an agreement on pay and benefits. CNHi is employing replacement workers while the strike continues. 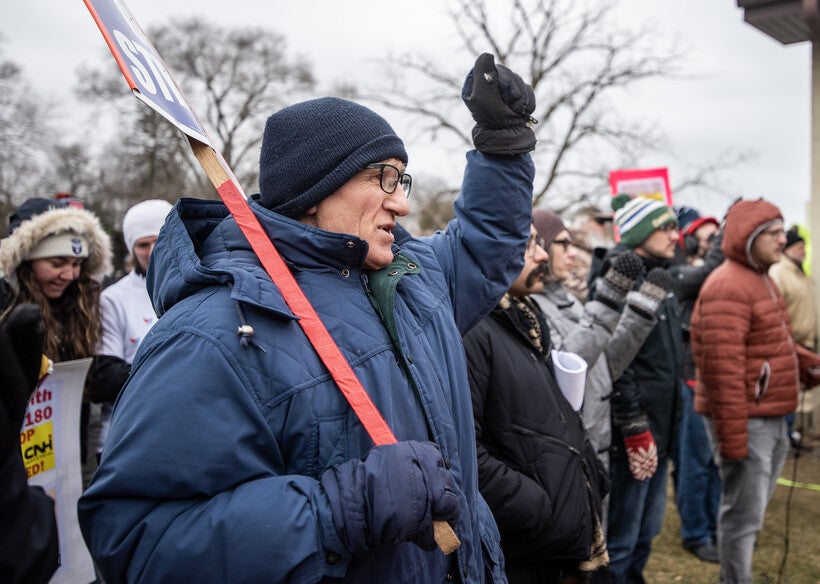 Petar Markovic, a worker at Case tractor factory for 31 years, attends a rally for a strike effort Saturday, Dec. 17, 2022, at the United Auto Workers hall in Racine, Wis. Angela Major/WPR

Union and company disagree on wages and benefits

Rich Glowacki, chairman of UAW Local 180's bargaining committee and president of the UAW CNHi Council, said the bargaining council unanimously decided not to accept the company’s last offer because it didn’t meet the needs of workers.

"The UAW CNH Council is ready, willing and able to get back to the table, negotiate in good faith and come with a fair agreement that's equitable to my membership for everything that they deserve and earned for the past six years," he said. "And the company needs to start rewarding us and start treating us as a valuable asset to their business."

In a statement, CNHi said it was disappointed that it has been unable to reach a tentative agreement with the union.

"Our last, best and final offer for our Racine, Wis. and Burlington, Iowa plants included significant wage increases, the addition of three new and different healthcare plans to choose from and many other enhanced benefits," the statement read. "Since April and throughout the UAW-initiated strike, we have been negotiating in good faith to reach an agreement that is fair and reasonable to our employees, our company and our customers." 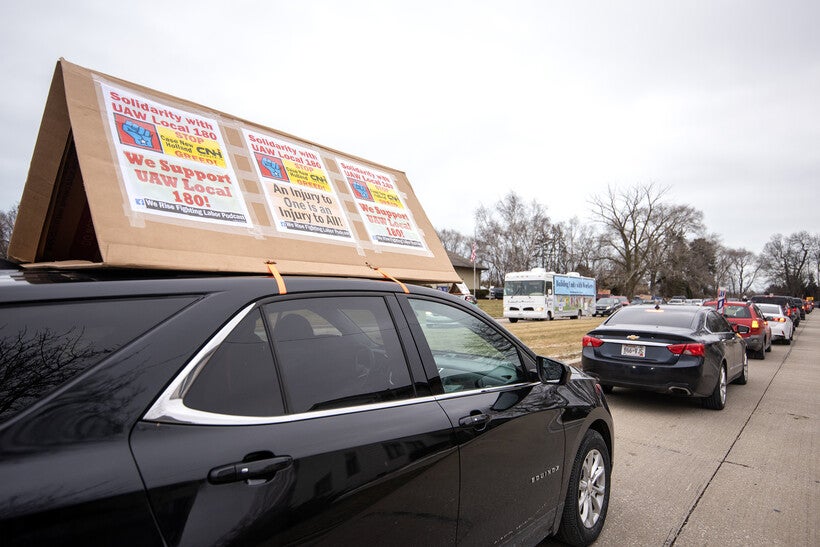 A company spokesperson did not respond to a follow-up email inquiring about next steps in the negotiation process.

Under the new proposal, Glowacki said the Racine facility’s workers would be underpaid compared to other local manufacturers.

"When you're offering people (in Racine) less than $23 an hour, and everywhere else in North America — for the same commensurate and comparable type of work — you're offering $26 or $27, there's a disparity there that they have not yet been able to explain," he said.

Glowacki added that the insurance options offered by the company also wouldn’t match the insurance workers received under the previous contract, and the benefits also could change from year-to-year.

"The amount of money that my members would end up having to spend on medical insurance — besides the premiums and the out-of-pocket — would negate any raise that the company gives us, especially the bread crumbs that they're offering," he said. 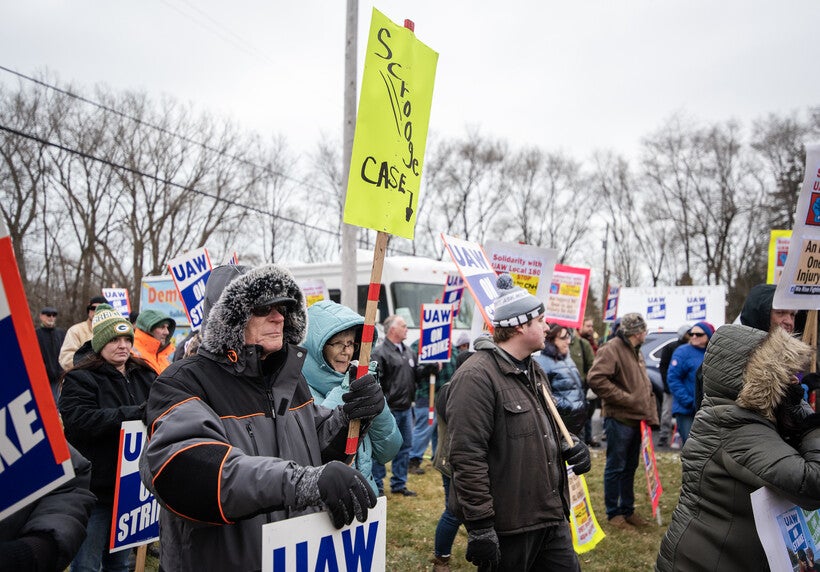 Although the workers on strike have been receiving $400 per week in strike pay from the UAW International, workers say the strike has been hard on their families.

Terri Sexton, a union member who has worked at CNHi’s Racine facility for 11 years, helped collect food items Saturday. She said the strike has been difficult for her financially.

"It's getting rough. I have not gotten a job yet because I tried to come down and help as much as I can," she said.  "When they need help, I'm always ready to come."

But after Christmas, Sexton said she plans to begin looking for another job to ensure she can support her family while the strike continues.

"I'm not giving up. My union’s not giving up. I'm not giving up on my union," she said. "(I) never thought that this would be the way that Case would treat their employees that make them literally billions of dollars every single year, and then come to work and do a quality job for them."

Another worker impacted by the strike is Jorgen Axelsen, who was a team leader in logistics at CNHi before the strike. He said being on strike has made it more difficult to pay his bills, but he’s grateful for the support he’s received from the community.

"The tremendous outreach from food pantries, local donations and everything has helped a lot of us to survive, to be able to have food on the table," he said.

Joe Barranco, who drove a forklift truck at the plant prior to the strike, said he had to get a part-time job to continue supporting his family during the strike. He plans to return to CNHi when the union and company are able to come to an agreement.

"It eats away at your savings, and mentally wears away at you," he said. "It's frustrating, but, at the same time, I don't want to start over because I put in 15 years there. My father retired from there. I just like unions, so I don't want to go somewhere else." 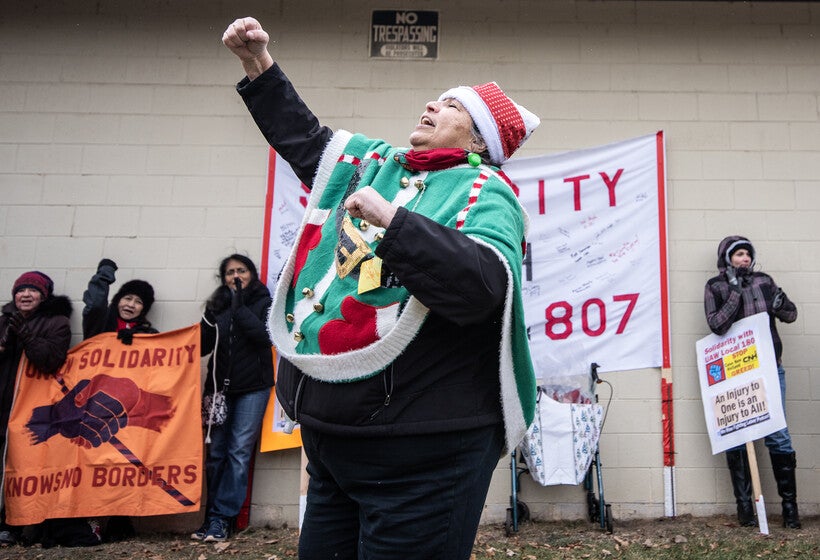 Diana Valencia from 9 to 5 Association for Working Women riles up attendees at the rally for striking Case truck factory workers Saturday, Dec. 17, 2022, at the United Auto Workers hall in Racine, Wis. Angela Major/WPR

Despite the challenges, UAW Local 180 members said they plan to continue fighting for a living wage and family-sustaining benefits.

"I've been here 15 years," he said. "I've had three surgeries — given my body, given my life — and this is the kind of appreciation I get? It leaves a little sour taste in your mouth. I think that's how it feels for everybody."

When the strike ends, however, Mercil said he isn’t sure how many workers will return to CNHi because many have been forced to take other jobs while on strike.

"That's a scary thought because a lot of us are family," he said. "They’re breaking up a family." 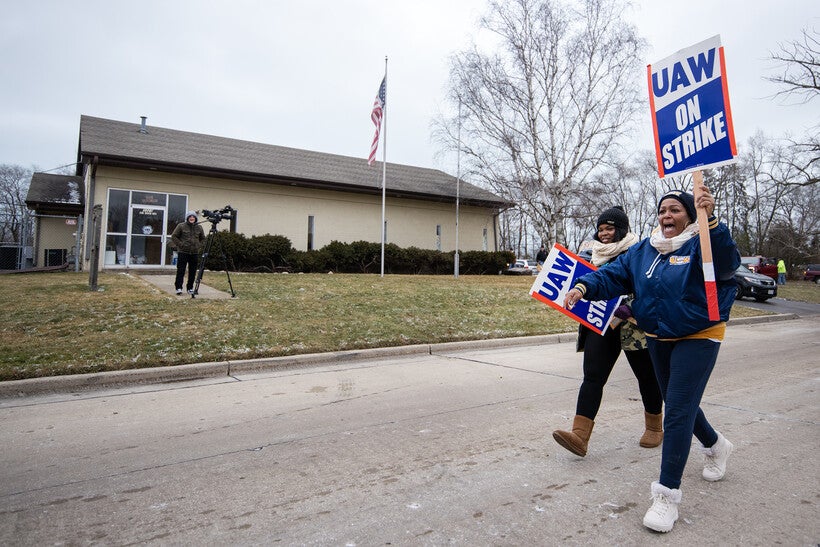