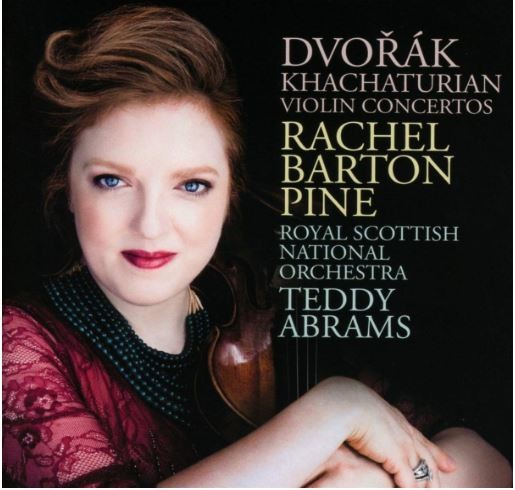 With Teddy Abrams And The Royal Scottish National Orchestra
By Stephanie Elkins
Share:

It's hard to imagine how she keeps improving, but with her latest release, American violinist Rachel Barton Pine raises the bar yet again.

She's been recording since she was 20 and has amassed a large and very respectable discography (39 and counting) that crosses genres and soundscapes, from blues to lullabies, jazz and chamber music.

Pine's latest release is on the Avie label, and it features two powerful violin concertos: one by Antonin Dvořák and one by Aram Khachaturian (each of whom wrote only one.)

It's a natural pairing. Czech composer Dvořák incorporated the dances and tunes of his native country into much of his music; the Soviet-Armenian composer Aram Khachaturian did the same with traditional music from Armenia and the Caucacus. That influence can be heard in both concertos, especially in the final movement of the Dvořák.

I was lucky enough to see Rachel Barton Pine perform the Khachaturian with the Madison Symphony Orchestra shortly before the recording was released—it was an unforgettable concert; joyful, inspiring and technically brilliant.

The recording beautifully capture's Pine's gifts and her natural rapport with a first-class orchestra in the Royal Scottish National Orchestra led by Teddy Abrams. It's evident that Pine has brought profound knowledge and feeling to both concertos, and this release captures not only her sensitivity and scholarship, but also a sense of excitement and sheer joy.