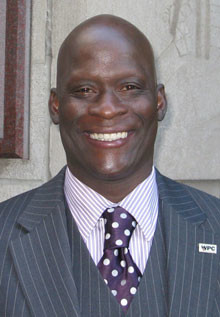 There needs to be an initiative to change the history of bad relationships between police and African American men in the United States. So says Dr. Eddie Moore Jr., the founder of the White Privilege Conference which deals with the idea that people who are white have distinct advantages in life compared to people from minority groups.

Moore is responding to the shooting death of unarmed black teenager Michael Brown by a white police officer in Ferguson, Missouri. The shooting touched off a series of protests across the country. Moore says the circumstances surrounding Michael Brown’s death have been too frequent for decades in America.

“I’m pissed and fed up, because it seems like consistently the experience I’ll have (as an African American male) with police could cause me to die, even with my hands up,” he said. “That’s what my concern is as a father with two boys of color.”

Moore says as a young black man, he never felt positive about the police, and he and other parents need to avoid raising their children with venom towards police. He says he will remain mad about the often strained relationships between young African American men and police officers, but he hopes to be active and not passive about the issue.

“I don’t want my son to have a negative feeling when he sees a police officer in our neighborhood,” he said. (Going forward he wants) “to play a role in positive relationships being established between my son, myself and police, and also asking questions about training, bias and anti-bias.”

Moore says a dialog about these issues needs to happen in communities across the country.

He was interviewed this fall about issues of race, privilege and diversity during a visit to the universities in the Coulee Region.