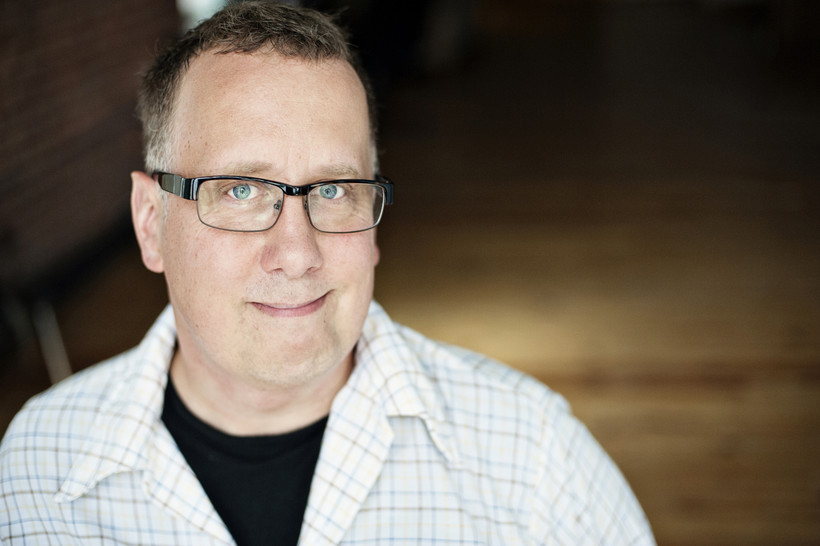 In New Book, Moe Shares Insights And Vignettes About The Challenges Of Depression
By Doug Gordon
Share:

In his memoir, "The Hilarious World of Depression," public radio host John Moe says that even in the darkest, most despairing times, he still finds depression funny.

"I've always loved comedy in a really, really deeply connected way," Moe told WPR's "BETA." "So in one sense, my way of understanding the world is to look for what's funny about it. But even when I'm at my worst, I see it as this sort of naughty, transgressive entity that is like a toddler behind the wheel of a car. It's a world out of balance. The toddler is in tremendous danger and you should get him out of there. But it's funny. It's funny that it's this invisible thing in your mind that exists to tear you down, that it's such an unmotivated cruelty that it sort of makes me laugh."

Moe worked at Amazon during its early days in the late '90s and early 2000s.

"We were all inventing our jobs at the time and it was confusing. And there were a lot of power plays and there was a lot of politics," he said. "And so when I had massive deadlines approaching with a lot on the line and I didn't have the tools to do my job because I was too busy figuring out what it was, that was one of my first instances of suicidal ideation, which was really surprising when it happened."

He recalls being on a bus in Seattle when this thought occurred to him.

"It wasn't that I was making a plan," he said. "It wasn't that I was in any danger. But there was like some wall that broke through. And I'm like, 'Oh, no. I guess now that's on the table.' It was terrifying. I left in 2001 for public radio where all my problems will be solved."

One of the toughest things that Moe has ever had to deal with was the death of his older brother, Rick. Rick Moe struggled with addictions to drugs like marijuana and methamphetamine.

"And there was a lot of depression that he didn't identify as depression," Moe said. "He thought he was being dumb and bad and making bad decisions and was weak when in fact, he had an illness that no nobody would ever choose. So he was in San Diego, and he had been clean for several years and was working at a Narcotics Anonymous hotline. And at that hotline, he was convincing people that life was worth living and that they should stick around. He could never seem to believe that about himself. He went to a shooting-range in San Diego, got a gun and shot himself."

Moe wrote a book called "Conservatize Me" that came out in the fall of 2006. In one section of the book, Moe writes about his visit to a shooting-range just outside Seattle. When he called the shooting-range, he discovered that he needed to bring a friend with him or else become a member because many people would just come to the shooting-range, check out a gun and shoot themselves right there.

"Rick read the book around the holidays, joined a shooting-range in February and died in April of 2007. I have to choose my words carefully. I didn't kill him. He pulled the trigger himself. But I've always felt that I gave him a road map to it and a plan. It's something that if some other random reader had done the same thing, I'd be like, 'Oh, that's terrible. They must have been in a really bad place.' But because it was my brother, I knew that it was my fault that he died.

"And I've been to therapy treatments specifically aimed at that belief. And I'm doing pretty well. There's always going to be part of my brain that knows that I'm responsible for his death. And it's smaller than the part that says, of course I'm not. But it's always going to be there."

Moe has found a therapist who specializes in cognitive behavioral therapy — a form of therapy he said he's most drawn to.

"What the therapy I went to really explored was, 'Okay, why is this happening and how can we redirect it to more sensible, more workable thought patterns that are more in touch with the real world?' And one of the ways that they do that is by saying, 'Okay, what are the things that are causing you agitation and where did these things come from?' That's about knowing where you are and how you got there. I sometimes compare it to the difference between having a map of where you are, where you've come from, where you're going, versus just constantly waking up behind the wheel and trying to get somewhere."