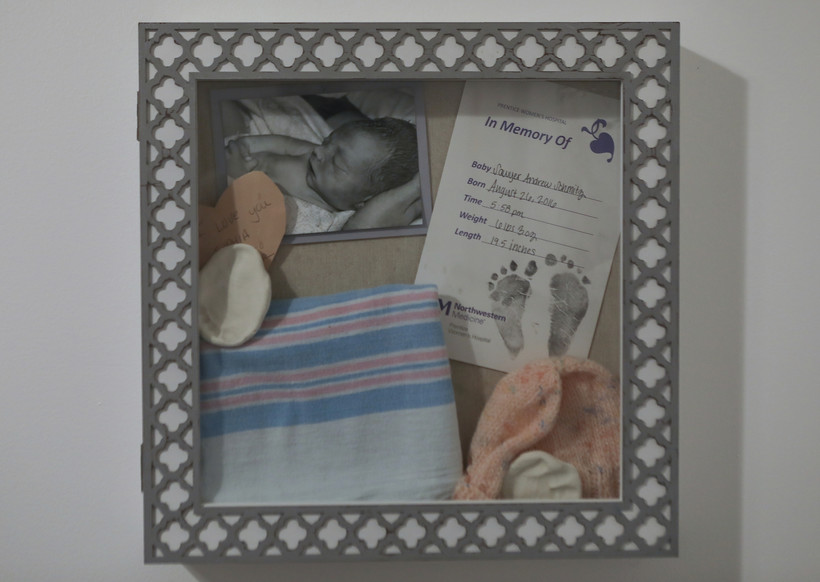 In this Monday, Feb. 18, 2019 photo, a memory box dedicated to stillborn Sawyer Schmitz is seen on the wall of the home of Lindsey Schmitz in Chicago. She says she’s wracked by the things that in her grief she didn’t think to do: "cut a lock of his hair, read a book to him, we never dressed him. At that moment, you just don’t know that’s what you’re going to want." Teresa Crawford/AP Photo

Psychotherapist: Miscarriages Are Isolating And We Don't Talk About Them Enough

Seventeen years ago, Julia Bueno was pregnant with twin daughters. Then, at 22 weeks, she miscarried.

Among the grief, she was saddled with isolation, misunderstanding and loneliness. Now a psychotherapist, Bueno can connect with patients suffering the same emotions as they unpack their own losses.

But in an interview with Kate Archer Kent on "The Morning Show," Bueno said she wants people to be able to share their losses in an open, non-judgmental way with people who might not know what it's like to lose a child.

"My hope and desire is that we get to a stage where we can open up to anybody because they'll understand and be there with you, regardless of having trod a similar path," said Bueno, author of "The Brink of Being: Talking about Miscarriage."

This story has been edited for brevity and clarity.

Kate Archer Kent: Did you find that there were stages of grief that you went through? Was it predictable?

Julia Bueno: No. I don't believe in stages of grief. We don't subscribe to that in the bereavement field so much as this oscillation of feelings. On a macro level, it's a case of sort of coping and then not coping, or feeling kind of vaguely at peace with things and then feeling overburdened with feeling. But the feelings themselves are very changeable. What I say to people is anything goes and anything is valid. Whatever you feel really is valid. I've heard it all but having said that, what is quite common is to experience a profound sense of loss and grief but also anger and also envy.

Partners, too have historically been quite ignored in the process, but partners often feel very similarly to the woman who has miscarried, but at different times and at a different pace.

KAK: Do you think culture impacts the way men and women grieve after miscarriages?

JB: It's very common in my experience for heterosexual couples to walk the path of grief differently. Maybe not everybody agrees with me on this one, but I think that men are socially conditioned to grieve in a way that is different from women. I think it's easier for women to be with their feelings, and women tend to be better at reaching out to their friends and their networks and speaking to those who they feel safe with. Men are more socially conditioned I think to be supportive and strong for their partner and to be bit more stoic and to keep stuff inside, and that can cause some misunderstandings.

When you don't understand how the other person grieves, that can cause friction between couples.

KAK: This topic doesn't get much attention as you mentioned through the book. You start out by saying that one in four pregnancies are estimated to end in miscarriage, but you also say it's quite possible that these estimates are low. Why is that?

JB: There's a real difficulty in nailing down exact numbers around miscarriage because the research papers rely on clinically recognized pregnancies, which means the woman has been in contact with the doctor or hospital and it's been recognized in that way. But of course there are countless pregnancies that go on without the medical radar at home.

We also know that the demographic trends are that women are having babies or thinking of having babies later on in life, certainly in the Western world. We do know that the risk of miscarriage increases as we get older. Estimates vary wildly depending on how it is tracked and what variables are used. All of this points to the fact that historically miscarriages are under-researched and misunderstood.

KAK: What's the best way to respond to someone who's sharing that they've miscarried?

JB: Firstly, any sentence that begins with the words "at least" isn't really going to be helpful, for example saying, "At least you weren't further along." It completely misses the mark.

One thing that people I think don't yet understand is that regardless of how long the pregnancy has lasted, that baby or child is nestled in your mind for a very long time. Often people don't conceive in the first month, it can take a while. In my case, it took a year and that was a very long time for a much-wanted, much-loved baby to be living in your mind, in your partner's mind too. The size of the loss is enormous. It's not just a case of a couple of weeks of pregnancy; it's much more profound than that.

But generally, the first thing I do is ask them to tell me their story. What's interesting is they'll often start way back, when they met their partner and when they decided they wanted to build a family and when that child began to live in their minds. I don't think we have the space to say that elsewhere. 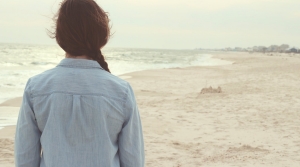 It is estimated that one in four pregnancies ends in miscarriage. Even though it is common, understanding miscarriage and talking about it remains difficult for many. We talk with a psychotherapist about the physical and emotional toll of miscarriage, and how we can support those who have experienced it.