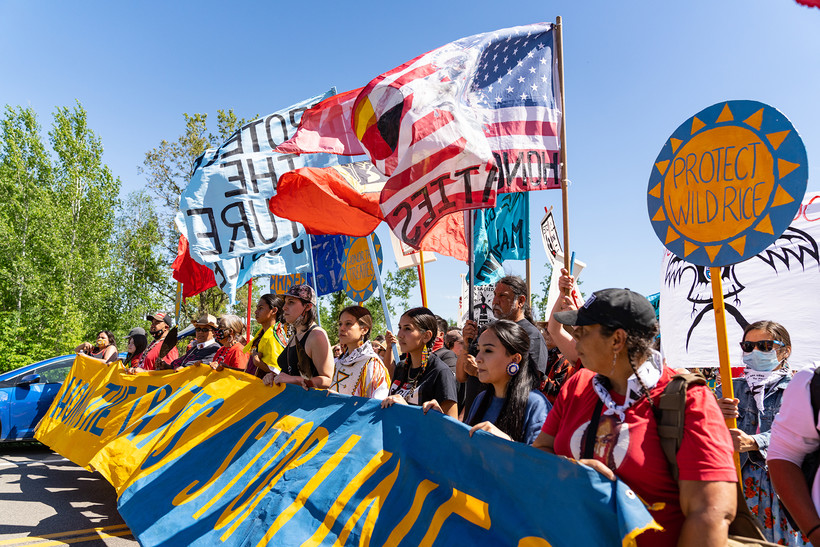 Thousands of protesters from across the nation have gathered in northern Minnesota in recent days attempting to shut down a controversial pipeline project that would result in more oil flowing through Wisconsin.

Canadian firm Enbridge has been replacing its 1960s-era Line 3 oil pipeline to improve the safety and integrity of the line. Minnesota tribes and environmental groups have been staunchly opposed to the project, which they say threatens wild rice beds along the route and is likely to worsen climate change.

"Our ancestors made agreements to take care of this water and land forever together, and now is our time to do that," said Winona LaDuke of Honor The Earth, a native advocacy organization, in a statement Monday.

Line 3 is capable of carrying nearly 800,000 barrels per day of Canadian tar sands and crude oil from Alberta to Enbridge’s terminal in Superior, but it’s currently operating at roughly half its capacity. The replacement project is expected to cost $4 billion in Minnesota.

The Treaty People Gathering in northern Minnesota has drawn celebrities and protesters who have set up blockades to prevent construction or chained themselves to equipment that have resulted in dozens of arrests. Protesters maintained a blockade at a pump station near Park Rapids, Minn., on Tuesday, according to the Associated Press. 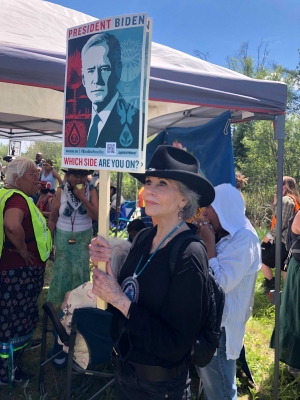 Activist Jane Fonda joins hundreds of protesters chanting "Stop Line 3!" and "Water is life!" gathered at the headwaters of the Mississippi River in Solway, Minn., on Monday, June 7, 2021 to resist a Canadian-based company's plan to replace an aging pipeline that carries crude oil from Alberta to Wisconsin. David Kolpack/AP Photo

Russ Bennett, 66, of Madison, was among hundreds of protesters who gathered at the headwaters of the Mississippi River in northern Minnesota on Monday and joined others as the protest continued Tuesday. He and others from Wisconsin arrived on Friday to protest the project.

"I believe in the science of climate change. I believe that we are largely responsible for it, and we are largely the ones that are needing to change the way we live and to make this massive change," said Bennett. "Some of that change involves acknowledging past injustices like how we've stolen the land from the people that have lived here for so long."

Bennett wants to see President Joe Biden shut down the project as he did with the Keystone XL pipeline. Biden has not taken a position on the replacement of Line 3, which was called for by the Obama administration in the wake of a spill from another Enbridge pipeline into the Kalamazoo River in 2010. Enbridge’s Line 6B released at least 843,000 gallons ­­­­into Talmadge Creek and the Kalamazoo River in Michigan, costing the company $1.2 billion to clean up.

Enbridge reached a $177 million settlement with federal agencies in 2016 that included the replacement of Line 3 "provided Enbridge receives all approvals to do so." The project threatens to put Biden at odds with his administration's previously outlined climate agenda. The pipeline is part of a larger production and refining system that could give off up to 200 million tons of greenhouse gas emissions each year at maximum capacity, according to the project’s environmental impact statement.

Enbridge has argued that without the pipeline, the oil would still be transported to markets by other means that aren’t as safe or energy-efficient.

The replacement project has faced multiple legal hurdles and a key decision is expected from the Minnesota Court of Appeals this month on whether the company showed there’s a long-term need for the project. 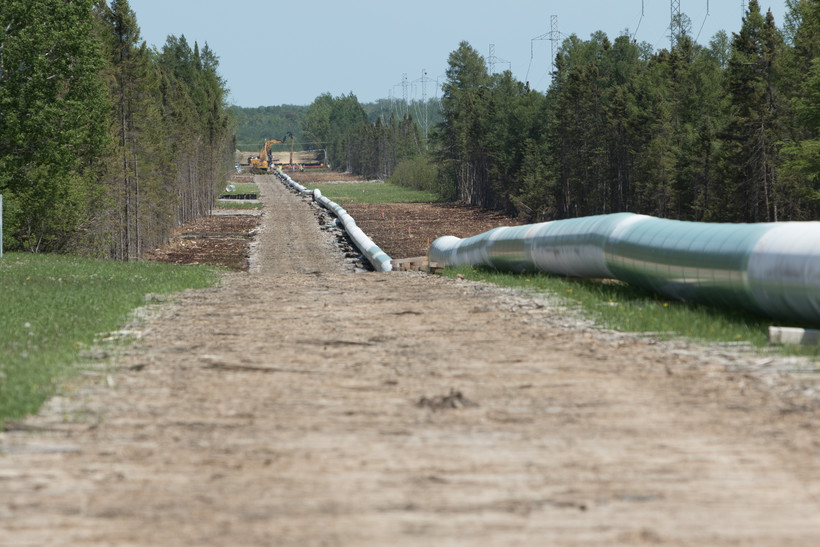 Enbridge has resumed construction on replacing its 1960s-era Line 3 pipeline across northern Minnesota, amplifying protests in the region. Photo courtesy of Enbridge

Enbridge has touted its $250 million investment in native communities and contractors, hiring more than 560 native workers. On Tuesday, the company said 44 workers were evacuated from a construction site on Monday. Enbridge crews assessed damage and began clean up on Tuesday. It called destruction done by protesters "disheartening," adding it would seek full prosecution of all involved.

"It should be noted that protests affected work at just this site, and construction continued yesterday and today across dozens of worksites in the five construction zones that stretch across northern Minnesota," said Juli Kellner, an Enbridge spokesperson in a statement. "To date, protests have had little impact on the project’s construction schedule which is on track to be completed and in service in the fourth quarter of this year."

Construction is about 60 percent complete, according to the Associated Press. More than 4,400 union workers from Minnesota and surrounding states installed pipe over the winter.

Terry Hayden, president of the Wisconsin Pipe Trades Association, said his members worked on the Wisconsin leg of the replacement project that was completed in 2018. They recognize that the energy sector is transitioning away from fossil fuels and toward renewable sources, but, Hayden said, "the transition cannot happen instantly or overnight."

"It's important to have pipelines of integrity that are safe and installed correctly and monitored, so the product can continue to be moved across the state of Wisconsin across the country while this transition takes place," Hayden said.

If the project is completed, Enbridge would begin sending more oil through Line 3 to its terminal in Wisconsin. The replacement also coincides with the company’s plans to expand the amount of oil flowing through its Line 61 pipeline, which extends from Superior to the Illinois border. Enbridge plans to send up to 1.2 million barrels of crude per day through Line 61 after Line 3 is built. 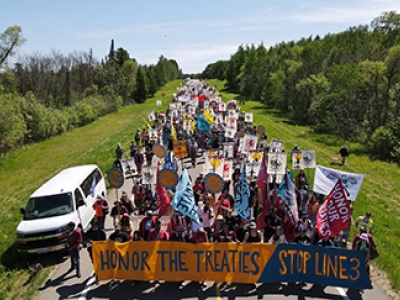 Bennett, from Madison, hopes the protests will draw attention to various pipeline projects in the region that "drag us from the direction we need to go in terms of fossil fuels." He said that includes the company's proposed reroute of Line 5 in northern Wisconsin. Enbridge is planning to reroute a roughly 40-mile segment of that line after the Bad River Band of Lake Superior Chippewa filed a lawsuit in 2019 to shut down the line on its reservation. The company is currently seeking state and federal permits for the project.

Hayden said he respects the rights of people to protest in a nonviolent way that doesn’t create risk for workers or the threat of a spill. Wisconsin lawmakers passed a bill in 2019 that expanded penalties for those who trespass to damage pipelines. Opponents argued it would have a chilling effect on free speech, while supporters argued it protected those who protest in a lawful way.

Enbridge is facing multiple legal challenges to its pipeline projects in Minnesota, Wisconsin and Michigan. In Michigan, the company has defied an order by Democratic Gov. Gretchen Whitmer to shut down its Line 5 in the Straits of Mackinac over concerns the aging line prevents too great a risk for a spill in the Great Lakes.