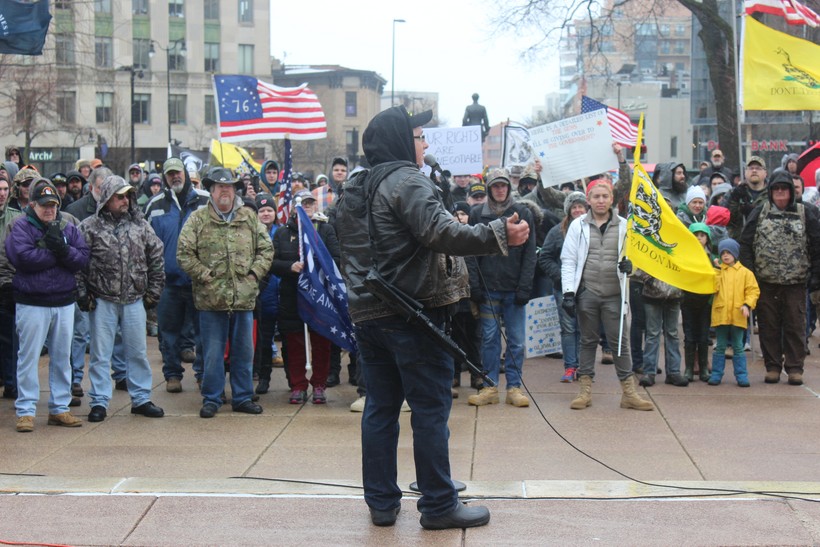 Rally A Response To March For Our Lives
By Bridgit Bowden
Share:

As organizers across the country encouraged gun rights supporters to bring unloaded firearms to state capitals over the weekend, about 200 people gathered Saturday on the state capitol grounds in Madison.

Many of them were openly carrying guns. They spoke in support of the Second Amendment, including the right to own assault-style rifles like the AR-15.

The event was organized by the local chapter of the National Constitutional Coalition of Patriotic Americans. Rally organizer Thomas Leager said the rally was planned in response to the March for Our Lives, which drew about 2,500 people in Madison and more in other cities across the state.

"Our voices need to be heard as well in the gun discussion, especially with people who don't necessarily own or operate guns," he said.

Gun rights supporter Mike Waddell said he came to the rally to show his support for the Second Amendment.

"There's been enough protesting going on to remove the Second Amendment," he said. "I'm a constitutionalist, I believe in all the amendments, and this is just one that needs to be defended."

Some of the people in attendance belong to the "3 Percenters" militia group, whose members call for armed resistance against restrictions on private gun ownership.

The rally took place on the same day as the first Dane County Farmers Market of the season, which also takes place on the capitol square. However, the market had mostly shut down by the time the rally started.