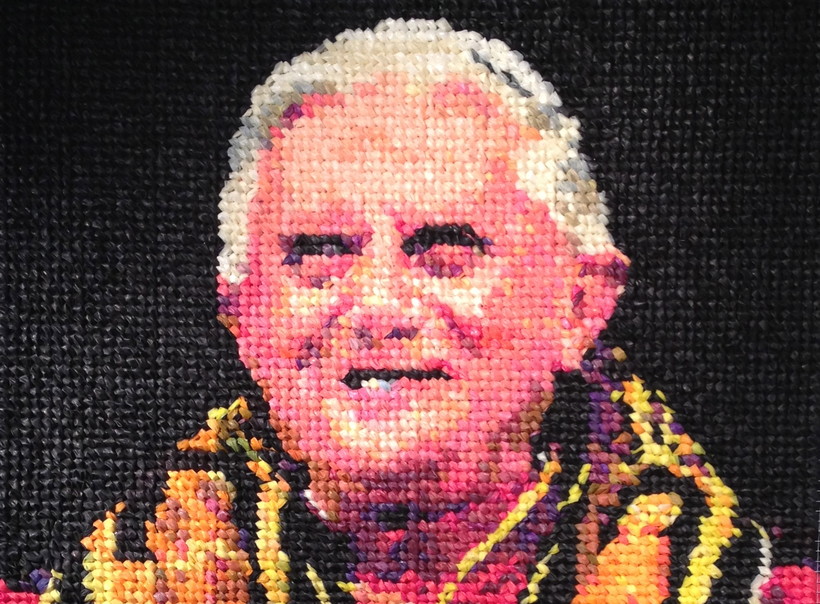 ListenDownload
A portrait of Pope Emeritus Benedict made from 17,000 un-lubricated condoms quietly made its public debut in Wisconsin last night.

Suburban Milwaukee artist Niki Johnson has fashioned a colorful collection of partly unrolled condoms into a two-sided portrait of the retired Catholic Church leader. The work is called "Eggs Benedict."Johnson describes how the work was made: "So for each pixel of color, it's between one to four condoms, and the condoms are inner-stuffed and folded to create the color tone."

Johnson says the idea came to her in 2009, after she heard an NPR story about Pope Benedict refusing to promote condom use - claiming the use of condoms boosts the spread of AIDS:

"Instead, he was advocating for abstinence. I was just kind of dumbfounded. I understand the idea behind abstinence-only, but to say that condoms help with the spread of AIDS is just irresponsible. So I decided to do what I could to stage an intervention."

Johnson insists the work is respectful. The Milwaukee archdiocese has not criticized "Eggs Benedict," and the portrait's debut at a Milwaukee gallery last night drew supporters, including Graeme Reid, of the Museum of Wisconsin Art.

"You look at it, and it's not caricature, it's not lampooning him. In fact, if you actually just brought somebody in and showed them the piece, you would not know it's made of condoms. You would actually have to go around to the back to know what it's made of."

Reid says the portrait makes the viewer think and question - a sign, he says, of good art.

"Eggs Benedict" will be on display at the Portrait Society Gallery until May 10.