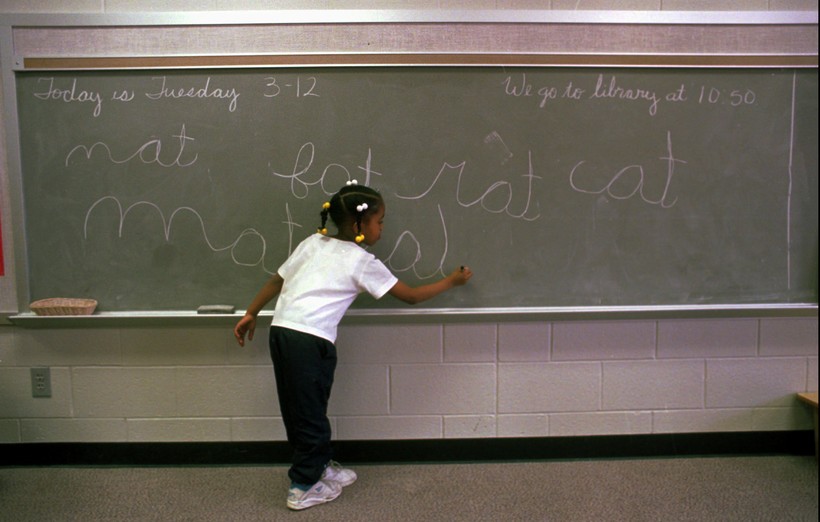 Kindergarten was first created in Germany in 1837 under the then-radical idea children could learn through play.

But today’s kindergarten classroom is much different from even that of 20 years ago. Heightened standards have pushed some teachers to forgo the emphasis on play and spend much more time on structured learning, says Christopher Brown, an associate professor of curriculum and instruction in early childhood education at the University of Texas at Austin.

One study suggests kindergarten has become more like first grade.

"Unfortunately, a lot of the research is showing that those opportunities for kids to have those times to play, those times to engage with others, are diminishing specifically to engage in academic instruction," Brown said.

For his own research, Brown followed a classroom of 22 public school kindergartners for an entire semester to find out what their typical day was like. It was packed full of activities, mainly literacy and math-based.

The class he followed only had 15 minutes of recess.

"By the end of the day, everybody’s exhausted. The children are, the teachers are, and I was as a researcher. It’s a lot of work and a lot of pressure on kids," he said. "I’m not saying kids can’t rise to the occasion, but I think it would be beneficial if they had the chance to process and to play with some of the ideas on their own away from being told what to do all the time."

Brown said he doesn’t think kindergarten should be completely dominated by play, either. Today’s children are reading at earlier ages, and entering schooling with more academic knowledge.

It’s all about balance, Brown said. But nowadays teachers have many more people to answer to.

Educational directives such as the No Child Left Behind Act have reformed and more sharply defined national educational standards.

"Teachers have to be accountable to a lot of different stakeholders now," he said. "Not just the kids and families in their classroom, but also the school, the district and the state."

That pressure, he said, has even led to a decrease in learning material outside of math and literacy. There are less opportunities for kids to learn social studies and science, which can help them find their place in the world around them.

And it’s leading some teachers to leave the profession, because they no longer feel like they can do what they love.

"They miss the opportunity to engage with kids in a more playful manner, to be able to follow kids’ interests, to be able to pursue a project that kids want to learn more about, rather than being told what to teach and when to teach it and how long to teach it," Brown said.