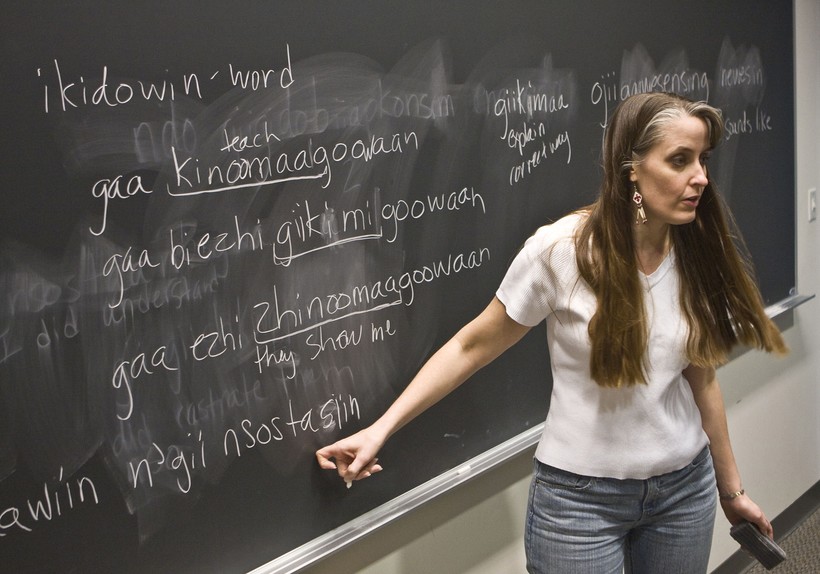 Professor: Ojibwe Language At A 'Make Or Break Point'

Ojibwe is spoken in many First Nation communities in Wisconsin, throughout the Great Lakes region and in many parts of Canada.

But as with many indigenous traditions, there is concern that the language will eventually disappear.

Wendy Makoons Geniusz, an associate professor of languages at UW-Eau Claire, spoke about the university's program with WPR’s Katharine Thomas for "The West Side."

Makoons Geniusz grew up in Milwaukee and began learning Ojibwe as a child.

Katharine Thomas: You mentioned the efforts to revitalize native languages. How is Ojibwe doing right now?

Wendy Makoons Geniusz: Indigenous languages around the world are endangered. They don’t say dead, they say sleeping, languages aren’t spoken anymore. Ojibwe still is healthy in that we still have speakers. There are places where people are still using Ojibwe as a language of communication. Especially for Wisconsin dialect, we are really at a make or break point. I’d say in Minnesota too.

One wonderful thing that Wisconsin has been doing for over a decade now is we have the very first Ojibwe immersion school so that elementary school students can be taught all of their subjects in Ojibwe. That’s in the Hayward school district. So, there are these efforts, we don’t know yet how that’s going to pay off. We’ve got graduates of some schools, but we don’t know what the future’s going to be right now. We’re still, in my opinion, really relying on that older generation. We are not in the clear, but I think we have some hope.

KT: How does language play into culture?

WMG: Without the language, you have at best a watered-down version of the culture. It’s a real controversial thing to say, but within Ojibwe, the entire worldview is in the language.

KT: Do you have objectives as a teacher for what you want your students to leave the classroom with?

WMG: As a professor, what I hope they’ll leave with is knowing a little more about Ojibwe language and culture. Understanding that these are indigenous people and people of Wisconsin. Indigenous people are still here and we’re still very much a part of the community today. If they have some information to debunk some stereotypes, that would be wonderful because they can go as a ripple effect and teach the world.

Correction: This story was updated to reflect the fact that there are three colleges in the UW System that teach the Ojibwe language. Margaret Noodin's name was also misspelled. We regret these errors.