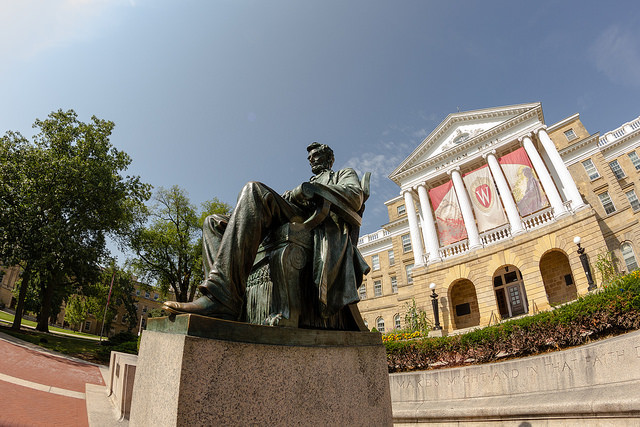 Professor: The Die Is Relatively Cast On UW Cuts

As the state Legislature's Joint Finance Committee moves through its list of issues in Gov. Scott Walker’s budget plan, public education advocates are still hoping that a proposed $300 million cut to the University of Wisconsin System will be reduced, in spite of the lack of additional tax revenue to offset the cuts.

Mordecai Lee, a professor of urban planning at the University of Wisconsin-Milwaukee, said that he thinks the UW System cuts will be significant, for several reasons. Sequence may play a role, he said. Because many other proposals have been decided on, less money is available for the Joint Finance Committee to allocate to the UW System.

"I think it’s going to be closer to $300 million than not. I think most legislators believe the University of Wisconsin is somehow ... inefficient in its spending," said Lee. "'Heck, they absorbed $250 million when Jim Doyle was governor. Why can’t they do a smidgen more — $300 million this time around?’”

Walker’s budget also included a proposal to remake the University of Wisconsin System as a public authority. However, the legislature voted not to advance this portion of the budget. Lee said that he doesn’t expect the Legislature to take up this issue again.

"I suspect that the die is relatively cast," said Lee. "Of course, the public authority appears to be dead. The Legislature would never give up control of tuition. That is sort of the ultimate of their powers."

While the cuts will have a definite impact on the university system, said Lee, they represent more of an ideological statement about the state’s priorities.

Additionally, Lee said that it is no accident that Wisconsin’s budget is in a deficit, but a reflection of the leadership’s political ideology.

"We’re in this situation because it reflects conservative Republican ideology. From their point of view, it’s a virtuous cycle to cut taxes, and then there’s a budget deficit. Then because of the budget deficit, you have to cut government spending," said Lee. "That’s a virtuous cycle of lowering taxes and making government smaller that they’re delighted about. And I think it’s important for the public to understand that this reflects a consistent, coherent political ideology."