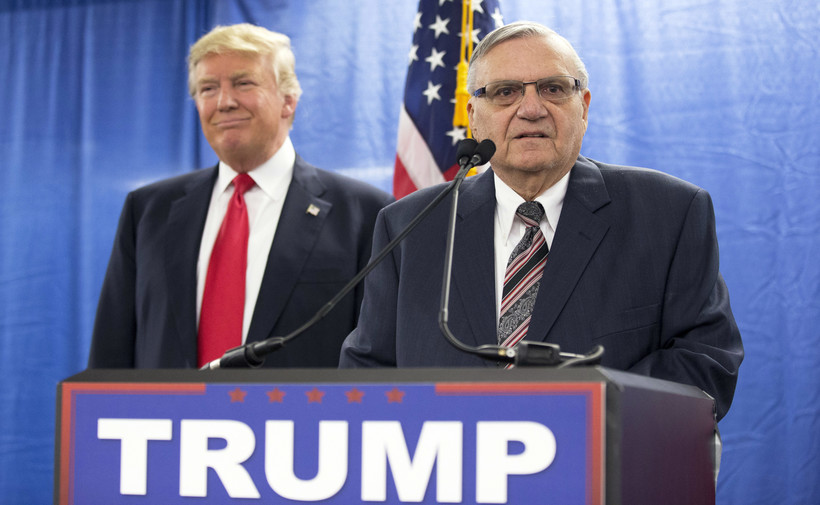 Professor: Arpaio Is Just The Latest In A Tradition Of Controversial Pardons

When President Donald Trump issued a presidential pardon last week for Joe Arpaio, the embattled former sheriff of Maricopa County, Arizona, it spurred controversy, even among some of his Republican peers.

As sheriff, Arpaio was famously aggressive on immigration, so much so he continued to detain undocumented immigrants despite a court order barring him from doing so, leading to a conviction for misdemeanor criminal contempt. Trump’s pardon came before Arpaio, a longtime supporter of the president, had even been sentenced for the crime.

.@POTUS's pardon of Joe Arpaio, who illegally profiled Latinos, undermines his claim for the respect of rule of law https://t.co/2FckGtwQ2m

Regarding the Arpaio pardon, I would have preferred that the President honor the judicial process and let it take its course.

But there is evidence to suggest Arpaio’s pardon won’t go down in history as controversial or particularly memorable. So says P.S. Ruckman, a professor of political science at Rock Valley College in Illinois, and editor of the blog "Pardon Power."

"Controversy is in the eye of the beholder," Ruckman said. "Presidents have pardoned multiple ax murderers, Nazi saboteurs, mafia gangland executioners, child molesters, conspirators, and the murderer of Abraham Lincoln. And so, it’s quite a rogue gallery. And from that perspective, I don’t think this one’s gonna stand out as one of the most notorious pardons ever."

Ruckman said Trump’s pardon of Arpaio fits a political pattern in some ways. However, he said it was odd how vocal the president had been about the pardon, hinting about it in days prior.

"The fact that (Arpaio) wasn’t even sentenced, he didn’t file an application to the Department of Justice, he didn’t go through the normal waiting period … and by the way, a pardon for contempt of court is pretty unusual in the big scheme of things ... You put together all of those with the fact that he’s seen as kind of a chrony of the president, and yeah, you’ve got a classic controversial pardon," Ruckman said.

The pardon was Trump’s first of his presidency. While some presidents have waited up to 600 days before pardoning someone, most begin issuing pardons right away, Ruckman said. He said presidents pardon hundreds of people throughout their term.

But the process is long and many who apply aren’t granted a pardon.

"Some people have waited as long as 10, 11, 12 years," Ruckman said. "When Mr. Trump came into office, there were 11,000 pending applications. And I think the idea that Sheriff Joe’s case was the most important, most deserving, is preposterous."

But Ruckman said Trump’s pardon doesn’t disregard the law. Nor will it likely cost him any political capital. He said an act of clemency in itself is a part of the government’s system of checks and balances.

"I think you could argue that with Trump doing this, he was effectively endorsing the behavior of the sheriff. I think there probably is some meat behind that criticism," Ruckman said. "But the idea that an act of clemency is flying in the face of the rule of law is kind of a generic criticism."