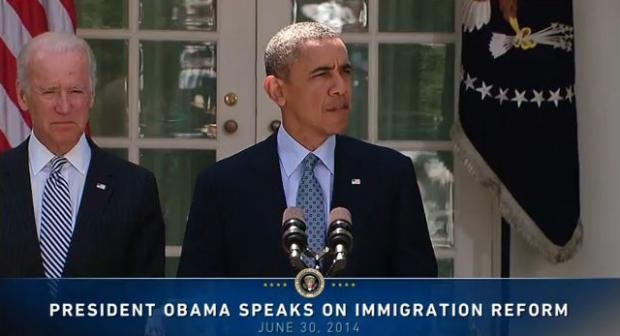 President Obama at the White House on June 30, 2014, announcing that he'll issue an executive order to act on border security and immigration reform  Photo: Whitehouse.gov

Assuming House Speaker John Boehner follows through on his threat to sue President Barack Obama over the president's use of executive authority, Boehner is in a "win-win" situation, according to an expert in presidential powers.

Boehner has accused Obama of repeatedly exceeding his authority via executive orders and said he plans to file a lawsuit. Obama, in turn, has blamed Republicans in Congress for failing to act on certain measures and says he’s had no choice but to work alone.

“Middle-class families can’t wait for Republicans in Congress to do stuff,” Obama said on Tuesday.

Boehner will likely do just that, said John Hudak, a fellow in governance studies and managing editor of the FixGov blog at the Brookings Institution. Plus, Hudak said, Boehner will score some points in the process.

“The speaker is going to be in the good graces of mainstream Republicans and Tea Party Republicans by doing this. And if he wins, that’s great for him — the president gets rebuked,” he said. “If he loses, it’s going to be a hell of a fundraiser for the Republican Party: ‘We can’t even get the courts to reign in the president,’ would be the lead of the campaign fundraiser email, probably.”

Hudak added: “For him, there’s really no loss here. A loss is a win and a win is a win.”

As for Obama, Hudak said he expects to see more executive action.

“When you try to threaten a president’s power, he usually reacts by exercising that power,” he said. “You have to show force and that’s what the president is doing in this situation, and it’s what he’s going to continue to do until the court tells him to stop.”