President Said A Coronavirus Vaccine Will Be Ready 'Momentarily'
By Megan Hart
Share: 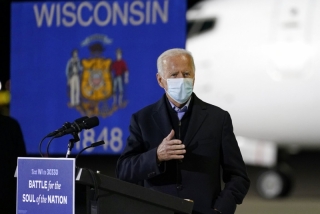 Biden Brings His Message Of Jobs, Controlling COVID-19 Spread To Milwaukee With Days To Go Until Election

A large group of supporters, many maskless, packed tightly into grandstands and a designated standing area at Austen Straubel International Airport, where the president took the stage around 3:15 p.m. Despite the surging number of COVID-19 cases in the state, Trump said he was happy to see such a big crowd.

The pandemic was a major focus for the president in his speech. He said a vaccine will be ready "momentarily" and that therapeutics have come a long way since the virus reached the United States earlier this year. Supporters chanted "Superman" as the president talked about his own recovery from COVID-19, a disease that has killed nearly 230,000 Americans, according to The New York Times.

Trump also joked about learning that his teenage son had been diagnosed with COVID-19: "About 14 minutes later, I said, 'How's Barron doing?' 'Oh, he's recovered fully,'" he said.

The president said shutting down the economy isn't the right approach to fighting the virus. He said that would lead to suicides and drug overdoses, and that there would be "no school, no graduations, no weddings, no Thanksgiving, no Christmas, no Fourth of July, no future."

Trump said he's worked harder to achieve more during his first term than any president in U.S. history. He appeared confident his track record will lead to a victory on Election Day.

Trump cited a recent poll from Gallup in which 56 percent of registered voters said they're better off than they were four years ago despite the pandemic, though the same percentage told the market research company that the president doesn't deserve another term in office.

The president touted the country's recent economic growth under his leadership. U.S. gross domestic product grew a record 33.1 percent in the third quarter, the U.S. Commerce Department reported this week. That's after the economy experienced record contraction during the previous quarter.

Trump also threatened that Biden wouldn't do enough to protect law and order. By sending the National Guard to Kenosha during a period of civil unrest this summer, the Trump administration saved the city, he said.

Trump and his surrogates have made frequent stops in Wisconsin in recent weeks. On Tuesday, Trump was in La Crosse. Vice President Mike Pence was in central Wisconsin on Wednesday.

Trump was scheduled to hold a rally in Green Bay earlier this month, but the event was canceled after the president was diagnosed with COVID-19. He visited Oshkosh in August and Green Bay in June.

Brown County, where the president visited Friday, has a "very high" level of coronavirus activity that’s trending upward, according to the Wisconsin Department of Health Services. Agency data shows more than 80 percent of northeast Wisconsin’s hospital beds were full as of Thursday.

"It is more important now than ever to avoid large crowds, especially here in Green Bay, Wisconsin, where we are seeing some of the most rapid spread of COVID-19 in the United States. Any kind of large gathering could have additional negative effects on a community already fighting community-wide spread," it read.

Other large events planned for the region have been canceled or postponed, and the Green Bay Packers have yet to host fans at Lambeau Field this season.

My Vote is for what makes this country great, freedom of speech & religion, 2nd Amnd, hard working tax paying citizens, police & military. In this election, we have freedom of choice, which all should respect. For me & these principles, my Vote is for @RealDonaldTrump. #Vote ☑️🇺🇸

Wisconsin is likely to play a critical role in the upcoming election. Already more than 1.6 million Wisconsinites have returned absentee ballots, according to the state Elections Commission.

In the final Marquette poll of the 2020 election cycle, Biden led Trump by 5 points among likely voters. That lead is within the poll’s margin of error.

Biden is expected to visit Milwaukee on Friday evening. In contrast to his opponent, the former vice president hasn’t held many rallies amid the pandemic, and he’s made fewer stops to Wisconsin.

At a Friday morning news conference, Gov. Tony Evers said state health officials can’t dictate how either campaign operates when it visits Wisconsin, but Evers hopes both will take precautions to prevent the spread of COVID-19. Evers said he believes the Biden campaign has taken coronavirus safety protocols more seriously.

Wearing a mask is the most effective way to slow the spread of the coronavirus, Evers said. State and federal officials should lead by example, something he doesn’t believe Trump and Wisconsin Republicans have done, he said.

"I bet you there will be more than a handful of people in that crowd who won’t be wearing a mask," he said Friday morning in reference to Trump’s Friday rally in Green Bay.