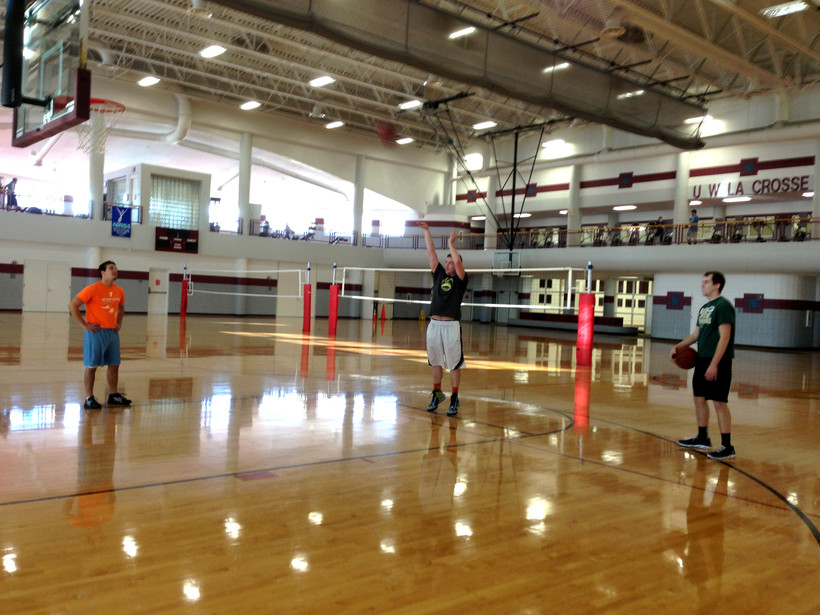 A 30,000 square-foot expansion of UWL's Rec Center will include more courts for intramural sports and expanded work out facilities. Photo: Maureen McCollum/WPR.

UW System President Has Called For Reform In Both Areas
By Maureen McCollum
Share:

On some days at the University of Wisconsin-La Crosse's Recreational Eagle Center, it's impossible to find an open elliptical machine or bench press. The Rec Center can be packed with students trying to work out between classes, studying and jobs.

“The top floor is going to be kind of a multi-purpose — more space for intramurals. Then the bottom of the expansion will be a brand new strength center, workout, cardio facility, which is fantastic,” said UWL Student Association President Kaylee Otterbacher.

The future of the Rec Center expansion, however, is up in the air. For one thing, with the governor looking to cut $300 million from the UW System, it’s unclear if there’s room for it in the upcoming biennial budget. But furthermore, it's a project that would be financed in part by segregated fees —  which, along with building projects, are something that the UW System president is pointing to as a possible area of reform.

Data courtesy of Legislative Fiscal Bureau. UW Stout segregated fees are charged on a per-credit basis. The above chart shows fees for a 28.3 credit courseload.

UWL students will eventually pay an extra $14 annually in “seg fees” to finance the Rec Center expansion, according to Otterbacher. Such fees cost UWL students $1,200 per year and fund the student union, a sustainability initiative and textbook rental — campus programs that do not get state support.

“I think for what you get, they are fair,” said Otterbacher. “The thing is, those seg fees might be high. They’re all student-centered programs. They’re programs typically students have voted on, that students want.”

At the December Board of Regents meeting, UW System President Ray Cross said all existing and future seg fees would be subjected to “unprecedented scrutiny.”

UW-La Crosse Chancellor Joe Gow says the campus's eight building projects are all it will need for some time. Photo: Maureen McCollum/WPR.

“As we all know, every campus has become more reliant on segregated fees, especially in the last decade or so. We intend to do a better job of accounting for those fees and finding ways to reduce them wherever possible,” said Cross.

Segregated fees have doubled at most of UW’s four-year campuses over the last decade. The average yearly seg fee is now almost $1,250.

Otterbacher will be serving as a student representative on UW System’s committee exploring seg fee reform. She said the cost of higher education is getting too expensive, but said it should be up to students on individual campuses to increase or decrease seg fees, not the System.

“It’s not my job at UW-La Crosse to decide what’s best for UW-Green Bay. That’s not fair. Students elect their leaders. They’re supposed to do that. That’s the way it’s always been done,” said Otterbacher.

Along with segregated fees, Cross wants to reform the approval process for campus building projects. UW facilities are generally funded two ways — through program revenue, like seg fees, and through state bonding.

“I can only speak for our campus — we think that everything we bring to the Regents is justified and important,” said UWL Chancellor Joe Gow. He said it’s difficult to tell how the UW System could change the approval standards since building proposals are already thoroughly vetted.

Data taken from biennial Wisconsin state budgets. Figures represent budgets for building projects authorized by state in biennial budgets, and are not adjusted for inflation.

There are eight major building projects underway at UWL and the future is uncertain for half of them. Gow said he’s concerned about getting a new residence hall approved, along with the student-backed Rec Center.

“These are times when things that used to be pretty secure are not necessarily that way,” said Gow.

Whether expanding UWL’s Rec Center and adding treadmills fit into those goals is ultimately up to the governor and the Legislature.

Editor's Note: This story is the first of a three-part series on possible reforms within the University of Wisconsin System.