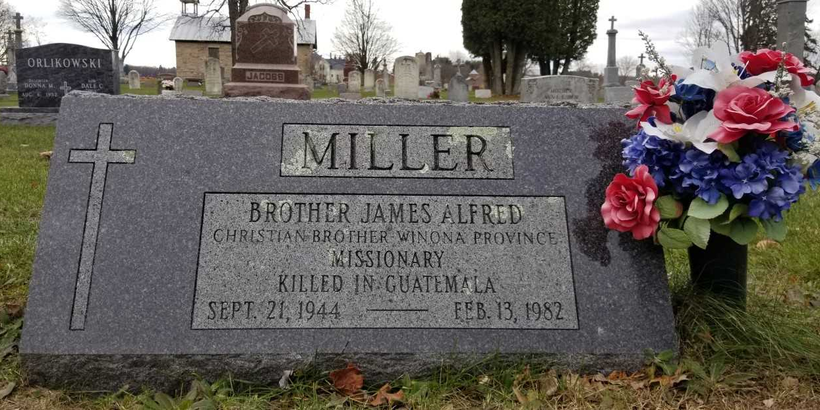 Brother James Miller Shot To Death In 1982 In Guatemala
By Patty Murray
Share:

Pope Francis has ordered a religious brother from Wisconsin, James Miller, be beatified after declaring the man died as a martyr.

Miller was 37 years old and a member of the Brothers of the Christian School when he was killed by masked men as he was doing handy man work outside the school where he taught.

Miller was born to a farm family in Stevens Point. He is now buried in a small cemetery near his home parish in Polonia.

The process for declaring Miller a martyr began in 2009, and the pope approved the decree Thursday, claiming Miller was killed during Guatemala's civil war out of hatred for the Catholic faith.

The Rev. Tom Lindner is pastor at Wausau’s St. Anne Parish and described beatification as the "penultimate step just before canonization," meaning it brings someone one step closer to becoming a saint.

At least one miracle must be attributed to the person posthumously to become a saint. Being declared a martyr exempts Miller from the usual beatification requirement of having a miracle attributed to his intercession confirmed, according to The Associated Press.

Lindner said testimonies in support of Miller's sainthood will be given.

"What is involved in canonization or beatification is people continuing to tell the story and putting people up for others to learn about and revere," Lindner said.

Lindner said Miller had a passion for Central America where he began working in Nicaragua in 1969 before being transferred back to the upper Midwest. Miller went to Guatemala in 1981 and was killed a year later.

Lindner said Francis, an Argentinian, has taken notice of those who worked in the region.

"Something like this with Brother James Miller would not have happened if Pope Francis weren’t from South America," he said.

"There has been a real attentiveness to the sacrifices of men and women who gave their lives in most cases in their ministry in Central and South America," he added.

Lindner doesn’t expect Miller to become a saint until at least a few more years, and a special mass must be celebrated before any designation is made.

Another man from central Wisconsin was beatified in November 2017. The Rev. Solanus Casey was born in Prescott and worked in Detroit.