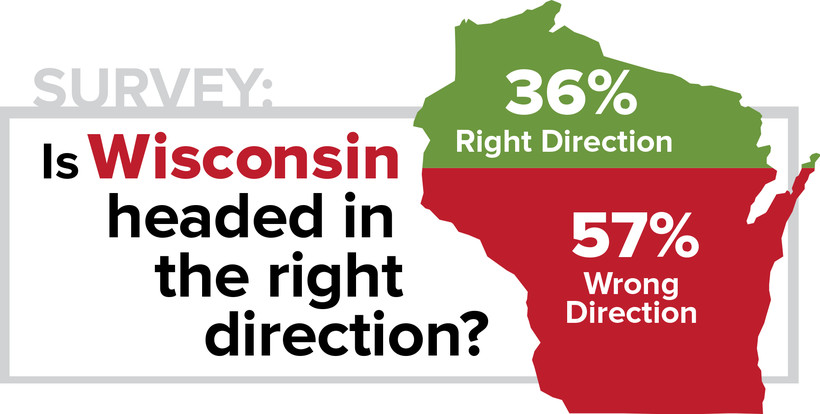 Wisconsin voters aren't happy with the direction the state is headed.

Numbers from the most recent Wisconsin Survey show 57 percent of respondents think the state is moving in the wrong direction — the highest figure in more than a decade — while just 36 percent said they were pleased with Wisconsin's trajectory.

The numbers are the worst that have been recorded by the survey during Gov. Scott Walker's tenure, as well as for the poll overall going back to 2003.

The pessimism regarding the direction of the state appears to be growing, even in comparison to recent surveys. The number of "wrong direction" responses rose slightly since the last survey in April, and more steeply compared to fall of last year, when just 44 percent of voters said they were dissatisfied.

The past year has been an eventful one for Wisconsin, marked by a lengthy state budget process, contentious policy fights over right-to-work policy and abortions, and the governor's short-lived presidential run. Other findings from the fall 2015 poll, including continued ambivalence about the health of Wisconsin's economy and growing disapproval of Walker's job performance, hint at other potential explanations for voters' sour mood.

Of those polled, 61 percent said the state's economic picture is "poor" or "not so good," up from 45 percent in fall 2014. That's compared to 38 percent who said things are "good" or "excellent." "You have to understand that Wisconsin is a part of a whole, a whole that is the United States of America," Kleefisch said. "And I think today, you're seeing a difference in where people think this country is headed."

While the survey showed only 29 percent of Wisconsin voters think the country is moving in the right direction, that number is on par with the median over the last 12 years.