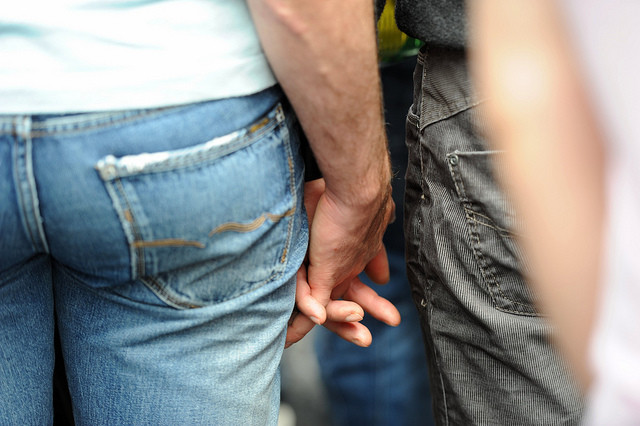 Last year marked the first time a majority of Wisconsinites were in support of same-sex marriage. Photo: Guillaume Paumier (CC-BY).

With State Ban On Gay Marriage In Courts, Marriage Equality May Factor Into Governor's Race
By Chuck Quirmbach
Share:

A new poll shows a majority of state residents continue to support same-sex marriage, with 55 percent of respondents in favor.

Since court decisions elsewhere have generally de-emphasized civil unions, the Marquette poll also asked whether or not people support same-sex marriage, to which 55 percent said yes and 37 percent said no.

Marquette pollster Charles Franklin says the results are not a surprise.

“It is clear over the last 10 years or so how much public opinion has been shifting on this issue, both here in the state and nationally,” said Franklin.

In the Wisconsin governor's race, Republican incumbent Gov. Scott Walker has opposed same-sex marriage while Democrat Mary Burke has spoken in favor of it. Franklin says he isn't sure if the new poll will spark more debate on the issue.

“There are lots of issues the public has opinions on, but they don’t end up being integral to the vote choice,” said Franklin. “Largely that’s up to the campaigns themselves.”

Franklin says typically jobs and the economy are bread-and-butter issues for a political campaign, but lawsuits in state and federal court in Wisconsin are challenging Wisconsin’s ban on same sex marriage and any rulings this year could spill into the governor's race.