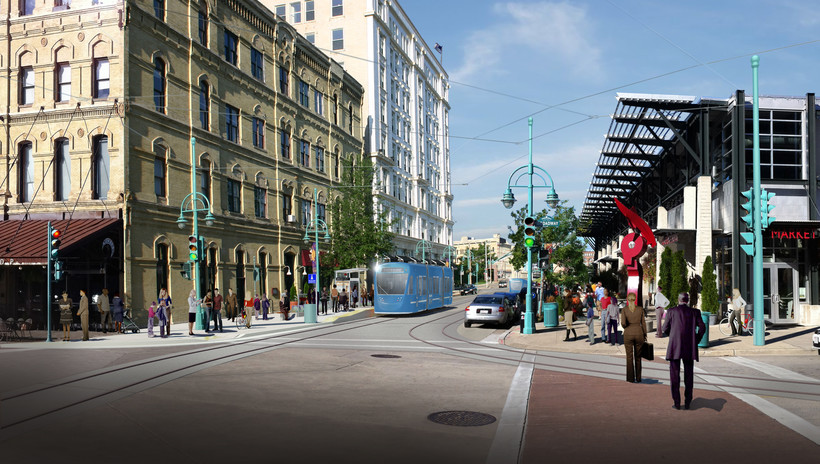 A proposed streetcar system for downtown Milwaukee has quickly become a highly politicized and divisive issue in the city.

In a vote this week, a majority of the Milwaukee Common Council voted in favor of the Milwaukee Streetcar Project. However, some officials on the council also managed to delay final approval of the project until Feb. 10.

Opponents of the plan are hoping the extra time will allow them to continue gathering enough signatures to seek a citywide referendum on the issue.

Rob Henken, of the Public Policy Forum, said the streetcar project and the government funds available to build it are specifically earmarked and can't be used for other transportation purposes. The $54.9 million is what is left of a federal government grant of $289 million to improve transit in the southeastern portion of the state awarded in 1991. That was supposed to include a light-rail system to provide an alternative to driving.

A map showing possible extensions for the Milwaukee streetcar's route.

All of those funds have since been used or returned in a 20-year battle of politics and policy.

“I just think it’s a shame, on both sides,” said Henken. “An issue like transit, which should be debated on the merits, and good cost-benefit metrics, and so on — turns into a highly ideological and political issue on both sides.”

Eric Jaffe, a transportation writer for CityLab, said many cities across the country face similar opposition when trying to establish new modes of transportation.

“One of the big knocks on the way modern streetcars are being used in cities is that they cater to tourists and economic development downtown, and don’t actually provide much usefulness to every day commuters,” said Jaffe.

However, Jaffe asserted that if a modern streetcar is designed properly and gets incorporated into a larger transit picture, it can be a valuable asset to a city.

Mayor Tom Barrett, a strong supporter of the proposal, has said that although the starter route is short and contentious, he believes eventually the route will be expanded to include routes to the Third Ward, Fifth Ward, University of Wisconsin-Milwaukee and even the airport.

Henken pointed out that President Barack Obama’s TIGER Grant Program, which distributes funds for infrastructure investments, could potentially help Milwaukee and other cities to expand and grow once the streetcar project is underway.

However, even if Milwaukee were successful in accessing TIGER funds for extending the streetcar routes, Henken believes it would likely not cover more than 50 percent of the cost, which means the city would still need to come up with additional local or private funds.

“On the one hand, I think there is some potential that once this gets started, people will see its potential and want more of it, and perhaps the political support will grow. But it also could be argued that before starting this initial two miles, we ought to have a little bit more solid idea of where these additional dollars might come from in the future to do these extensions,” said Henken.