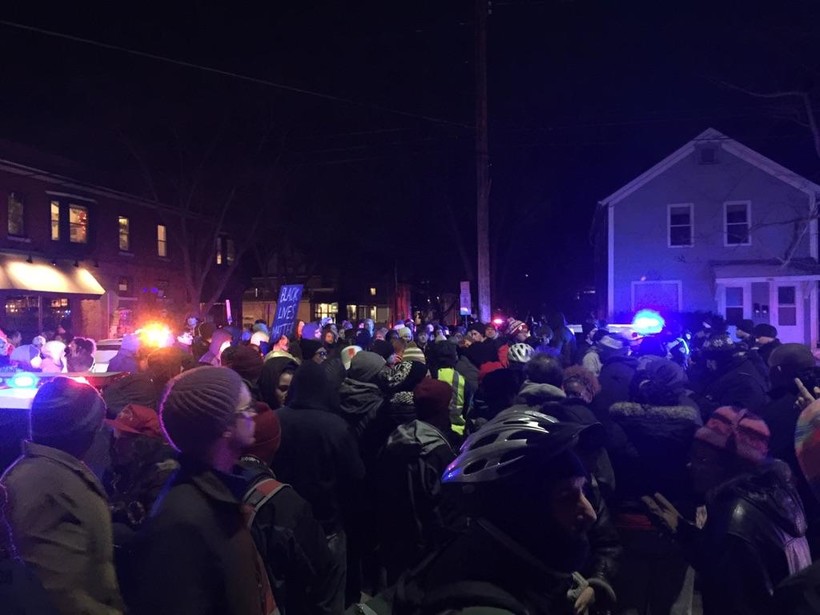 Protesters gathered near a police blockade around the apartment where 19-year-old Tony Robinson was shot by a police officer.

Police Shooting Of Black Teenager Leads To Protest In Madison

The shooting of an apparently unarmed black teenager on Friday night led to protests that lasted until the early hours of Saturday morning in Madison.

According to the Madison Police Department, a police officer shot a 19-year-old black man inside an apartment on the city's near east side at around 6:30 p.m. Police Chief Mike Koval said at a news conference later in the evening that the officer had forcibly entered the building after hearing "sounds of a disturbance" outside. He was then reportedly assaulted by the young man, and suffered a "blow to the head." The officer responded by open firing.

Koval said after the police officer administered first aid, the young man was taken to a hospital, where he died of his wounds.

The police didn't confirm the identity of the victim, but others, including family members, said that his name was Tony Robinson.

Koval said that the officer had been in the area to respond to a complaint regarding an individual who had been running "in and out of traffic" and who had apparently "battered" a pedestrian. Koval said the individual was apparently the same one who was shot.

Koval also said that while it's not certain whether Robinson was armed, an "initial search" had found no evidence of a gun. Many protesters also alleged that Robinson was unarmed, though as of yet there has been no confirmation of that.

Later on Friday evening, people began to gather by the police blockade that had been set up around the crime scene. The crowd of at least 100 people led chants of "Black lives matter," and "No justice, no peace," some of them beating drums.

Protesters filing out of the City-County Building in downtown Madison. Galen Druke/WPR

Among those gathered by the crime scene was Robinson's grandmother.

"I just can't understand. They killed my grandson in cold blood. They murdered him," she said.

Brandi Grayson, a leader of a local black rights coalition known as Young, Gifted and Black, was also among the protesters.

"We knew this would happen," she said. "How could this not happen? We live in the most racist city in the country."

Many of the protesters soon left the crime scene to march to the City-County Building in downtown Madison, where two witnesses to the shooting were reportedly being held by police. The protesters entered the building, which they occupied over the course of at least an hour, chanting and demanding to speak with police.

The crowd dispersed at around 1:30 a.m. Grayson later claimed that the witnesses were ultimately released.

Even after the protesters dispersed downtown, people continued to linger around the crime scene in the early hours of Saturday morning, watching the police blockade. One of them, Mercedes Davis, said that he was shocked by the event.

Another bystander, Adam Brown, said he was saddened by the entire situation.

"It's crazy to think about," he said. "A 19-year-old kid, just going throughout his day, and in a couple minutes, he's not here."

Meanwhile, Koval said that the state Department of Justice will investigate the shooting, in compliance with a recently passed law that requires all officer-involved shootings to be reviewed by external agencies.

The law had been pushed for as part as a response to another officer-involved shooting in the same east side neighborhood in 2012. In that incident, the victim was an unarmed white man who had accidentally entered a neighbor's home when drunk.

Meanwhile, further demonstrations in response to the shooting seem likely, based on what a number of protesters indicated. Grayson said that protesters from Friday night and Saturday morning had agreed to gather for a "strategy meeting" on Saturday to plan what to do next.

Watch a video of the protest near the crime scene below:

Also, you can watch this video of Tony Robinson's aunt and grandmother addressing the gathered crowd. Note: This video includes some obscene language.