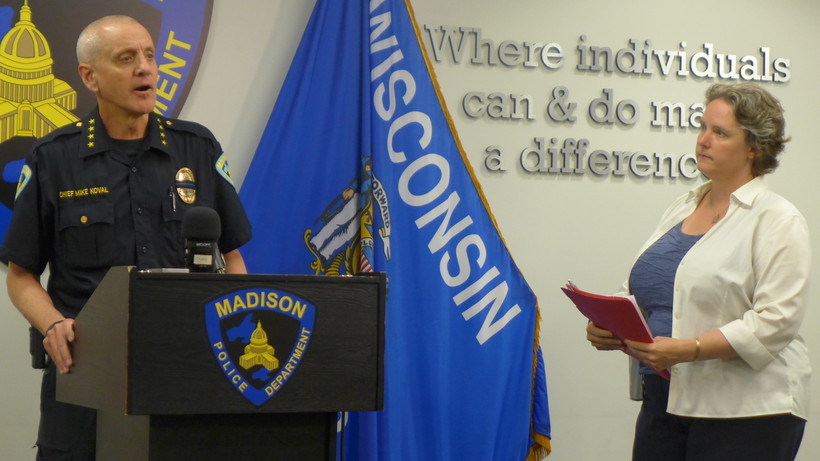 Madison Police Chief Mike Koval responds to questions on July 1, 2019, two days after a shooting injured a man during a city fireworks event while Mayor Satya Rhodes-Conway looks on. Both praised the response of authorities, but said there could be changes to large events in the future. Shamane Mills/WPR

Police Looking For Suspect After Shooting At Madison's Shake The Lake

Two days after a shooting at Shake the Lake — an annual fireworks display over Lake Monona — the mayor of the city of Madison assured the public that large gatherings will continue but there could be changes to enhance security.

"We will be looking at what this event looks like in the future," said Mayor Satya Rhodes-Conway at a press conference Monday with Madison Chief of Police Mike Koval.

Authorities continue to look for the shooter who pulled out a handgun and fired several rounds around 10:30 p.m. on Saturday, June 29, according to police reports. A 20-year old man was struck with a bullet and has been released from the hospital with non-life threatening injuries.

Police say the shooting wasn't random and that two groups of people were fighting before the incident.

Koval didn’t want to divulge detailed security tactics used during the event, but said there were "hundreds" of officers between city police and Dane County sheriff’s deputies. He wouldn't say how many private security officers there were or whether Big Top Sports and Entertainment provided any.

"Any event especially of this caliber is going to be an exercise of risk management," Koval said Monday.

"And I think with the level of preparation we’re trying to mitigate and minimize that risk as best we can while also appreciating and respecting individual rights of privacy for people who basically just want to come down to the lake and enjoy some music and watch one of the Midwest’s most spectacular fireworks," he continued.

Both Koval and Rhodes-Conway expressed frustration over what they said was the proliferation of guns.

"Let me be clear I would like to be able to do more but the state does not give us that option," said the mayor, who also called on Congress to pass background checks and prevent the sale of military-style weapons.

When asked about the possibility of metal detecting wands being used at future events, Koval said that's unlikely because it's labor intensive and there are too many entry points to the lakeside fireworks show.