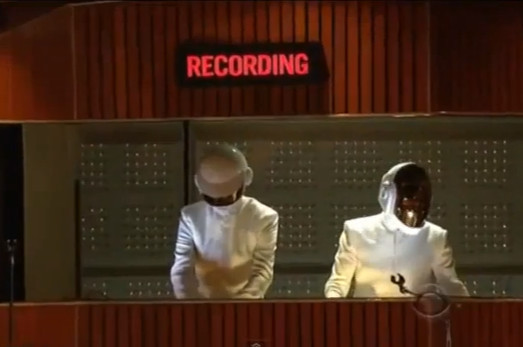 If the Grammys ever had good intentions of recognizing artistic achievement in music, the show has forsaken such lofty goals long ago for just making good TV.

With millions of dollars at stake and the offer of a powerful platform for an already ailing industry, the minds behind this annual broadcast have increasingly taken Machiavellian stances when programming "Music's Biggest Night." The producers have increasingly shunted aside the awards component for bigger, flashier artist performances.

And who can really blame them? The Grammys are now a 21st Century variety show that must please so many musical constituencies -- pop, rock, hip-hop, country, classical -- while trying to capture the zeitgeist. The show must be both edgy and non-threatening. None of that is easy, particularly when the shows' producers want to appeal to a multi-generational audience and one whose petty divides can make certain acts a tough sell.

On Sunday night, solo performances by Beyonce, John Legend, Pink and rising country star Kacey Musgraves offered either too much spectacle or too little. Lorde's rendition of "Royals," one of the biggest song's of the year, should have been a highlight but her stage presentation came across like a Bjork-inspired performance art compared to Pink's over-the-top, acrobatic theatrics.

Ultimately, to square that circle of appealing to a wide audience, the Grammy producers turned this year to musical mashups -- established veterans sitting in with of-the-moment stars -- which serves to both bridge the generational divide but also create that all-important spectacle. You won't find Fleetwood Mac's Lindsey Buckingham jamming with Nine Inch Nails on the American Music Awards!

With two notable exceptions, these medleys didn't really live up to their billing. Buckingham rocking out with Nine Inch Nails, Queens of the Stone Age and Dave Grohl was relegated to closing out the telecast and cut short. Metallica dug up their '80s thrash epic, "One," with classical pianist Lang Lang joining in with a few melodramatic flourishes, but that performance begged the question of … wha? Robin Thicke fronting '70s horn band Chicago was a Vegas-style medley that had the intensity, integrity and depth of a sequins jump suit.

Even the night's most poignant moment came across as a little heavy handed because of producers' desire for creating a watercooler moment. Macklemore and Ryan Lewis performed "Same Love," a song that has become an anthem for supporters of same-sex marriage, was a slow burn but going well. But then, former rapper/sometime actress/occasional crooner/part-time officiant Queen Latifah came onstage and married a group of same-sex and heterosexual couples waiting until the Grammys to tie the knot. And then Madonna burst in, dressed like a Hank Williams cowboy and acting out of her depth, as she struggled to sing the chorus of her '80s hit "Open Your Heart." It could have been a powerful moment, but instead the music was outshone by staged artifice.

Despite the misfires, Daft Punk's groove-tastic medley was exactly the kind of pan-generational funk that bridges all gaps. "Get Lucky" was likely the biggest hit of 2013 and this performance featured the two robot-headed producers, along with Pharrell Williams, Nile Rodgers and as a surprise guest, Stevie Wonder. The rendition was excellent, even though Pharrell used taped vocals during the chorus. The band namechecked Chic's "Freak Out" (written by Rodgers) before seguing into Wonder's "Another Star" -- all built onto the same elastic rhythm. Rodgers' grin was as much about how "Get Lucky" validated his love of dance music as it was the pure joy of the music moment. He should have received a lifetime achievement award at the song's conclusion. The only disappointment? When the song ended and the artists took their bows, the Daft Punk guys didn't clap like robots.

In terms of a runner-up to "Get Lucky," rapper Kendrick Lamar and Las Vegas rockers Imagine Dragons had the most intense and passionate stage show when the smashed together Lamar's "M.A.A.D. City" and the Dragons' "Radioactive." Kanye West's name appeared in a few awards categories, but there's no missing his influence in Lamar's puffed-up performance. Dressed in white, Lamar both channeled and then recharged the band with his smoldering flow on the mic.