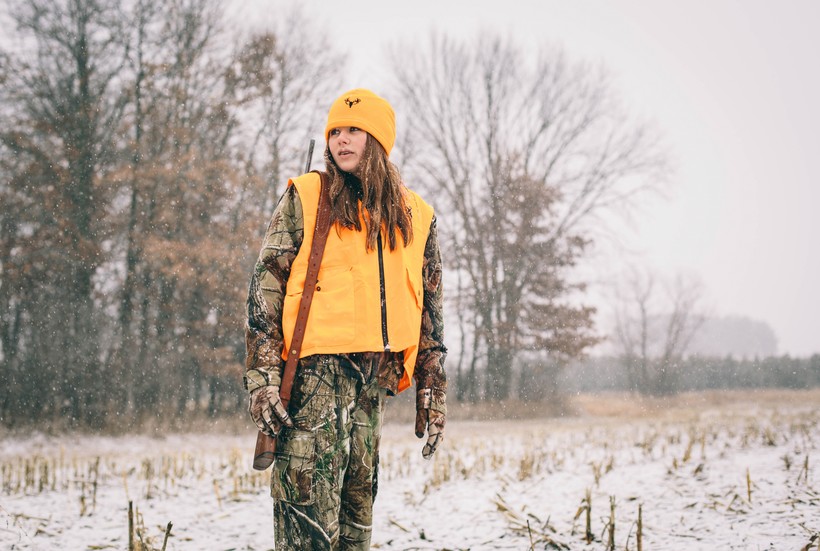 Kailee is one of the young female hunters that are featured in "Blaze Orange." Photo: Travis Dewitz.

Dewitz Shows Many Who Hunt Deer Are Women, Children
By Judith Siers-Poisson
Share:

On the weekend before Thanksgiving, hundreds of thousands of Wisconsinites head out to the woods to hunt deer. It’s a tradition enjoyed by men, women, adults and children alike — something that one Eau Claire-based photographer strove to represent in his new book.

Travis Dewitz grew up as a hunter in a deer-hunting family himself.

“It was a big part of what I did in my childhood,” he said.

In his early 20s, he “stopped making time for it,” and didn’t hunt for close to 10 years. But, even though he wasn’t hunting regularly, he never lost a sense of nostalgia for the tradition.

Recently, he decided to revisit deer hunting — this time armed not with a gun, but with a camera. The result is “Blaze Orange: Whitetail Deer Hunting In Wisconsin,” a book of photographs that document the culture and traditions of Wisconsin deer hunting.

Besides the hunters themselves, Dewitz’s new collection features images of businesses and individuals whose livelihoods depend on the hunt, as well as people who work to keep the hunt safe, like state Department of Natural Resources game warden Scott Thiede.

Moreover, the book highlights the fact that there are many women who hunt in Wisconsin, defying the sport's reputation as a male pasttime. Dewitz said that he thinks that deer hunting culture is much more accepting of female hunters now that it was even a decade ago.

“One of the unique things I ran across, especially with the younger generation,” Dewitz said, “is that 75 percent of the first-time hunters I saw were girls.”

He was surprised by that, having expected it to be a 50-50 split in terms of gender.

Dewitz found those girls to have a strong interest in the sport and to be very excited, “especially if they had gotten their first deer.” Not unlike what many adult hunters enjoy about the experience, he said that many of the girls just seemed to be spending the time out in the woods with family members.

“They look up to their dads,” Dewitz said. “And they want to go out in the woods with them.”

One “Larry Meiller Show” listener who said her name was Darlene shared a story that reflected how much deer hunting can revolve around family. She said that she had been hunting deer and other animals for over 40 years.

“When my husband and I had four sons within the first 5 years of our marriage,” she said, “I told him I was not going to be shopping in the mall —  I was going to be hunting.”

Her husband taught not only their boys to hunt, but Darlene as well. Darlene said it’s been a wonderful experience for their family, and that she and their sons continue to hunt even though her husband has since passed away from Alzheimer’s disease.

“My husband gave us a real blessing when he taught us to hunt,” she said.

Be sure to listen to Darlene tell her family’s story.