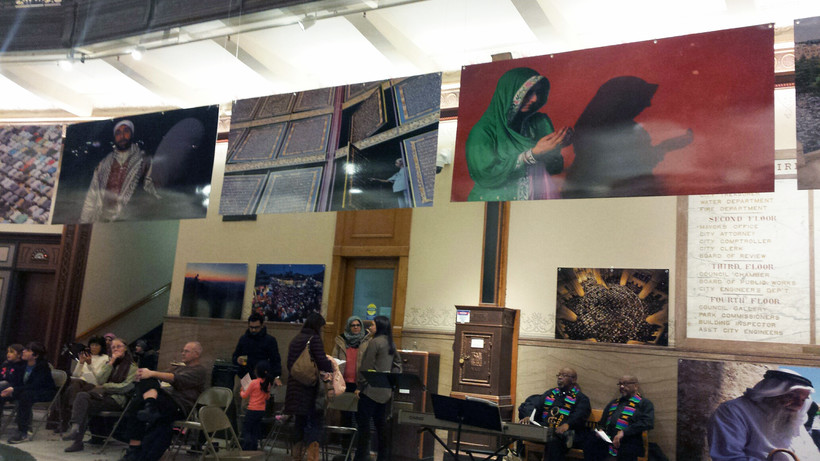 The opening of the "The Spirit of Ramadan" photo exhibit at Milwaukee City Hall.

A photo exhibit celebrating the Muslim holy month of Ramadan is now up at Milwaukee City Hall. Local organizers say they hope the display brings more understanding about Islam during a time of political change.

The international touring exhibit titled, "The Spirit of Ramadan," features about 40 large pictures of Muslims from many nations. Janan Najeeb of the Milwaukee Muslim Women's Coalition said she hopes the art counters what she calls a wave of Islamophobia "that has been part of the political landscape for the last year and a half."

"It's unprecedented and led to an enormous rise of hate crimes against Muslims, and what we've really realized is that the vast majority of people just don't know who the Muslim community is," Najeeb added. "They don't know who Muslims are, and we want to be able to offer an opportunity for people to get to know us."

There were also prayers from leaders of the Buddhist, Jewish, Christian, Sikh, Quaker and Sufi faiths.

Exhibit curator Lina Ali said she hopes the display encourages Muslim-Americans to stay strong amid what she calls harsh attitudes.

"This is your calling," Ali said. "This is our calling. This is the time to stand up with honor and dignity, to speak loud and be heard against bigotry and racism."

Najeeb said locating the exhibit in City Hall is a statement that Muslims are part of the community that's here to stay.