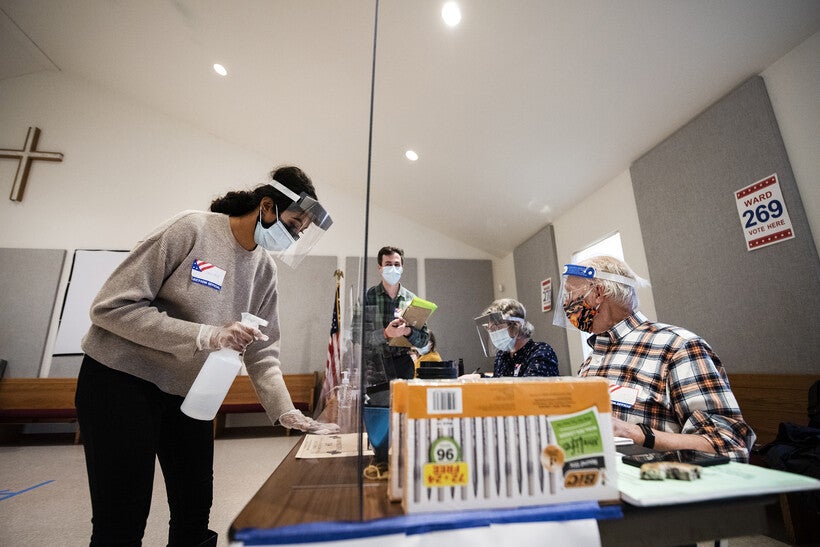 Sanjana Segu, left, sanitizes tables after voters receive ballots Tuesday, Nov. 3, 2020, at Divine Peace Lutheran Church in Milwaukee. Segu said she decided to become a poll worker for the first time when she heard there was a need this year. Angela Major/WPR

As voters head to the polls across the country, Wisconsin's coronavirus outbreak continues to worsen. New reports of COVID-19 cases are at an all-time high in Wisconsin, based on the latest data published by the state Department of Health Services.

DHS reported 5,771 new cases of the disease Tuesday, bringing the average for the past seven days to 4,537 daily cases. Tuesday's new case total is the highest that figure has been since the pandemic began.

There were 52 new deaths from COVID-19 reported Tuesday, including the first in Menominee County. On Tuesday, 15,344 tested negative.

Thirty percent of people who got tested for COVID-19 over the past week were positive for the disease, according to DHS. That rate has been on the rise since the beginning of September.

On Sept. 30, DHS also introduced an alternative positivity rate, one that measures the percentage of tests that are positive, instead of the percentage of people who get a positive result. The new metric takes into account people who have been tested multiple times. The seven-day average for that number is at 15.6 percent.

According to DHS, there were 1,648 COVID-19 patients hospitalized as of Monday. A total of 11,844 people have been hospitalized because of the disease, or 5 percent of all positive cases.

The latest figures bring the overall total of positive cases in Wisconsin to 238,067, according to DHS. A total of 2,102 people in Wisconsin have died from COVID-19.

As of last week, the state's Fox Valley region continued to have the most new cases per capita over the previous two weeks. The state's northwest region saw cases rise most rapidly.

Wisconsin's daily testing capacity — based on the availability of test supplies and adequate staffing — has grown from 120 available lab tests in early March to 57,104 as of Tuesday. The number of actual people with new test results reported Tuesday was 21,115.