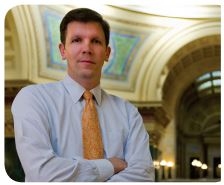 Shawn Johnson has covered the state capitol for Wisconsin Public Radio since 2004.  His stories can be heard regularly on WPR’s newscasts, he’s a frequent guest on the talk shows of WPR’s Ideas Network, and he’s an occasional contributor to Wisconsin Public Television.

Shawn’s stories have also been featured on National Public Radio’s "Morning Edition" and "All Things Considered."  He has won awards from the Associated Press, the Wisconsin Broadcasters Association, the Milwaukee Press Club, and the six-state Midwest Broadcast Journalists Association.

Shawn worked previously for public radio station WUIS-FM in Springfield, IL, where he covered state government and rural affairs.  Prior to that, he was an Assistant Producer and Online Producer for WBBM-AM in Chicago.