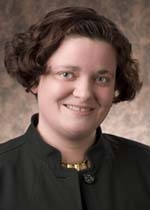 Patty Murray hasn’t seen it all quite yet, but is working toward that goal in her position as Wisconsin Public Radio’s reporter based in Northeastern Wisconsin.  Her beat centers on the economy and jobs, but she’s willing to cover everything from the politically relevant to oddball stories that happen more often than one may think.

Patty has been recognized with awards from the Wisconsin Broadcasters Association, the Milwaukee Press Club, and the Northwest Broadcast News Association with a prestigious Eric Sevareid award.  She is frequently called upon by editors at National Public Radio to file pieces for programs such as Morning Edition and All Things Considered.

Growing up, one of her favorite television shows was “WKRP in Cincinnati.”  As a child, she hoped to become the next Johnny Fever.  As a college student, however, she realized the world did not need another disc jockey. So she decided to become the next Les Nessman instead and focused on news.  She first took a job for South Dakota Public Broadcasting where she realized the power of storytelling in the NPR style.

After graduating she paid her dues as a reporter at WNAX, a powerhouse AM station covering five states in the Midwest.  That’s where the famous bandleader Lawrence Welk got his broadcast start way back in the day, before Patty’s tenure there.  Part of her duties at WNAX included giving the farm report and Patty learned what pork bellies really are -- bacon!

Cattle and grain prices are fascinating, but Patty knew her future was in the dairy state and she headed east to Green Bay.  Luckily, she grew up in Omaha, Nebraska, and knew about football after spending her formative years listening to her mother yell at the Cornhuskers.  To date she has covered more Packers-related stories than she ever thought possible.