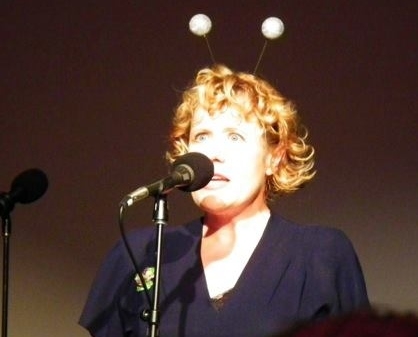 Michele Gerard Good was born in Chicago and raised in northern Wisconsin.  After graduating from Ripon College with a degree in theatre, she spent most of her life pursuing an acting career – studying “the Method” at The Actor’s Studio in London, voice with Marni Nixon in New York and improv at The Second City in Chicago – and taking any and every role that came her way ranging from Sally Bowles in "Cabaret" to Emily Dickinson in "The Belle of Amherst".  She has also directed, taught acting, and adapted several plays for stage production, including a collaboration with Tony award-winning playwright Willy Russell on an African-American adaptation of "Educating Rita".  Along the road, she garnered innumerable skills from temping, running a transformer manufacturing company and serving as Artistic Director for the Campanile Center for the Arts in Minocqua, WI and the Laboratory Theatre of Chicago and Madison.

A self-proclaimed public radio addict, Michele decided to parlay her hours upon hours of listening pleasure into a career by becoming a weekend announcer for Wisconsin Public Radio in 2009.  Since then, she has worked with the Audience Services Team, been a Marketing Assistant, was Show Manager for Michael Feldman’s "Whad’Ya Know?" and even filled in for Jim Packard as Michael’s sidekick a time or two before finding her home as Weekday Evening Announcer, Technical Director for "Central Time", Director of the 9XM Players for WPR's Old Time Radio Drama, and reader for "Chapter A Day".