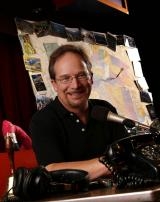 I started life as a zygote and before long found myself a blastula. Over the years I've gained and lost gills and a vestigial tail, discovered uses for my opposable thumbs and forefingers, and married twice. I was the youngest of four sons born to David A. and Geraldine G. Feldman (for the record, the others-in descending order are Clayton, Howard and Arthur) all of whom think they're funny and three of whom acquired professions (medicine, law and medicine) to fall back on. We grew up in Milwaukee in the days when nobody thought anything about it; by default I'm the only one left in this neck of the woods. I keep meaning to get out.

When I graduated from the University of Wisconsin in 1970, two things occurred to me: (1) my education was spotty due to the school being shut down repeatedly for Vietnam and other protests and (2) I had majored in English and (2a) there is no career called "English." Very few job listings begin "English majors wanted." Panicked, I enrolled in Education and within a year found myself in an internship (before that was a dirty word) that no one else wanted (the previous intern had been sent packing for wearing sandals to the welcome at the country club) in Kenosha, WI. In Kenosha I made friends I've kept for life and shed my first wife who has made friends she's kept for life.

Coming full circle to take a teaching job at Malcolm Shabazz Alternative High School in Madison, I found myself with my annual Christmas depression in 1977 and decided to volunteer my services at the local listener sponsored radio station, WORT, where they put me to work delivering their newsletter. Quitting before my first delivery, I nonetheless returned the following year and finagled some fill-in work on air. Soon I had my very own Friday night call in for the undateable, bedridden and geriatric called "Thanks for Calling," wherein people called in seeking comfort and instead found me. One thing led to another, and within a year I was doing a 6 to 9 AM show from a greasy spoon, Dolly's Fine Foods, which I called "The Breakfast Special." I annoyed people while they ate (discovering some who weren't supposed to be together at all) and played music in between. The die was cast. Since this was easier, I quit my teaching job, and within two years quit my radio job just so I could experience the total career reversal called "driving cab" (I had the lowest revenue per mile of any driver since I didn't know the city and hid from calls, but I made friends I've kept for life).

Having failed as a cabdriver, I was driven back to radio, this time at Wisconsin Public Radio; Jack Mitchell, the Grand Kliegle, had been making lazy circles in the air over me since my WORT demise, and offered me a weekly hour on Saturdays, featuring live music, a live audience and talk. Since it started at 12:05, I called it "High Noon," promoting myself as "the fastest Mike in the Midwest." Jack canned that show after a year, and I started another one from a bar, the much lamented (it burned down) Club de Wash, slightly made over to look like a breakfast nook, for a show called "A.M. Saturdays," which I did not name. Since drinks were served at this show, we attracted large numbers of nurses coming off-shift who had to have four bloody Mary's before they went back on. We also attracted Lyle Anderson, a hanger-on who now screens phone calls on "Whad'ya Know," John Thulin, our piano player and man-about-town, and my second wife, Consuela, who at that time was a fan. It was John who said of the crowd at the club, "this is the only talk show where people come to talk."

I was plucked from this show by Dan Fabian, program director of Chicago's WGN (which I soon learned means "Who Goes Next?") who, slumming in Madison one day, offered me a job doing late afternoon drive. It was Dan who had the brilliant idea of teaming me with a former traffic copter reporter who could easily be heard over the props, telling both of us it was our show. Suffering a really good Christmas 1984 depression in Chicago after being fired (don't ever try looking for a radio host job at the unemployment office on Division Street) I was startled to find an offer from Jack Mitchell attached to the rock which came through my Goethe St. window. Sensing my desperation, he wanted me back. Wanting to redeem my name (or, rather deem it) in Chicago, I didn't want to go, but thought I had to at least meet with the guy. Making up an outrageous proposal that no one could agree to (live weekly show, live band and audience, call-in, designed for national release) I met with Jack halfway between Chicago and Madison, at the Time Museum in Rockford. "Let's give it a try," he said. "Whad?" I said, later lengthening that to "Whad'ya Know?" That was in 1985.