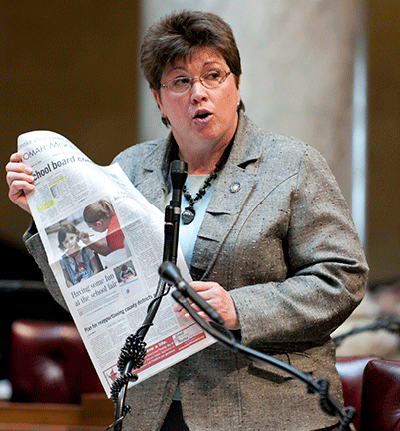 Kathleen Vinehout is the Wisconsin Democratic State Senator for District 31. She is running as a Democrat for Governor of Wisconsin in 2018.

Kathleen, 59, followed her dream over two and half decades ago when she started her own dairy farm in rural Buffalo County, milking 50 cows in an old red barn with tie stalls. The farm is now certified organic and produces hay and grain.

She came into politics late in her career. In 2006, she ran for State Senate and beat a popular Republican incumbent in a mostly rural district. She has been re-elected twice.

In the Senate, she has worked to make health care affordable, bring more equity to school funding, and find alternatives to incarceration. As a member of the audit committee, she has overseen the evaluation of state programs and has sought to make the state run more efficiently. In each of the last four budget cycles, she has written alternative budgets that reflect the different choices that she would have made with the money available.

Some of these choices include making all technical colleges and two-year UW campuses free for Wisconsin residents, expanding Badgercare to cover 79,000 more people, healing the deep cuts to our university system, and adding $100 million to fund broadband across the state.

Before entering politics, Kathleen taught in and directed the Health Service Administration program at the University of Illinois at Springfield. Before that, she directed the education department at the Visiting Nurses Association in St. Louis. She has graduate degrees in Health Services Research and Public Health and an associate degree in Agriculture.

Growing up, her family often had problems making ends meet. Her dad was a construction worker and a member of the Laborers’ International Union. Her mom was a nurse. Both served in the Air Force during the Korean War. When she was a farmer, her family struggled for nearly two years without health insurance.

Today, Kathleen still lives on her farm with her husband, Doug, and son Nathan. In her spare time, she enjoys her two horses: Vana and Rosie and her cat, Rustle.