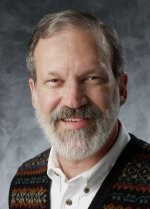 Jim Fleming was born in Madison, Wisconsin, grew up in Champaign, Illinois, then later returned to Madison as an undergraduate at the University of Wisconsin majoring in English. During this period, he worked as a volunteer at Wisconsin Public Radio.

In 1974, Fleming co-produced "The Snow Goose" and then two years later co-produced the production of "Guernica" which won the Ohio State Bicentennial Award.

In 1975, Fleming became a co-host on WPR's "Morning Report," then worked as cultural producer/interviewer on the arts magazine Art and Soul between 1977 and 1984.

For more than thirty years he has been a reader for "Chapter a Day," a program which brings the best of literature to radio.

During his years at WPR, Fleming has also held a number of management positions including music director and associate director/program manager, overseeing Wisconsin Public Radio's programming through much of the 80's.

In 1990, Fleming joined the national production team of To the Best of Our Knowledge. Though he retired from the music service in December 2009, he continued to work as host of "TTBOOK" until 2013. He continues to be the producer of Chapter a Day.

Related Websites:
To the Best of Our Knowledge
Chapter a Day
Biographical information last updated on November 12, 2016 - 2:00am